Kids Encyclopedia Facts
Not to be confused with Craven Park, Barrow-in-Furness or Old Craven Park.

Craven Park (known as KCOM Craven Park for sponsorship reasons) and also referred to as New Craven Park is the home of Hull Kingston Rovers R.F.C. It is situated on Preston Road in Hull, East Riding of Yorkshire, England.

In 2006 the ground and pitch were substantially improved as the club sought a return to the top flight of English rugby league. Plans for Hull Kingston Rovers to move from Craven Park to a new purpose-built rugby league stadium to be constructed at a new, unconfirmed site were suggested in 2007, but shortly after this, Hull City Council, in partnership with Kingston Community Developments Limited and Hull Kingston Rovers, announced that terms for lease agreements had been reached to support the long-term future of Craven Park. These terms enabled investment and development of the stadium to move forward.

The initial phase of redeveloping Craven Park was the lease purchase of a temporary seated stand which replaced the use of the inadequate south terrace for visiting away fans. Hull Kingston Rovers' second season in Super League coincided with work beginning on the extension of the standing terraced East Stand. This extension increased the capacity of the stand by 1,120 bringing its overall capacity to 4,750. A similar extension to the opposite end of the stand was completed in 2009.

A new purpose built South Stand is likely to house away supporters. This would allow the new North Stand to be used by home Fans. A new South Stand is likely to have a capacity of around 2500 with facilities that will take the club forward. Designs are yet to be announced, but it is likely to be a terraced stand. An extension to the East Stand and a new purpose built South Stand will take the grounds capacity to 14,500, which would see Craven Park become the 2nd largest Championship, only beaten by the Odsal Stadium, and should they return, it become the 7th largest Super League ground.

Capacity- 2,600 (seated)
The North Stand was originally a temporary stand that was erected after the ground ceased being used as an athletic venue. In 2013, the new £8 million Colin Hutton North Stand opened for the 2013 Rugby League World Cup game between Papua New Guinea and France. The North Stand also deliver an Enterprise Business Centre and Training Centre. There are 42 fully furnished offices which make up the Enterprise Units, all of which are located on different floors within the North Stand. 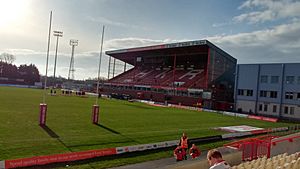 Capacity- 5,000 (seated)
The West Stand includes the main seated stand a small terraced area below executive boxes, which holds around 500 fans. The stand houses the stadium's main changing rooms that were redeveloped before the 2014 season to improve the size and facilities of the changing room. Inside the stand there is the Robins Nest & Harry Poole bar for Home and away fans. This is a restaurant with pitch side views and exclusive player and coach interviews after a match. The stand also houses the TV gantry. 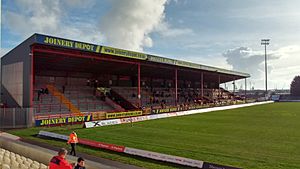 Capacity- (standing)
The East Stand is considered the Kop end of the ground and is covered terrace that runs almost the full length of the pitch. The right side was extended in 2008, and the left side is due for future expansion, although no date has been given. 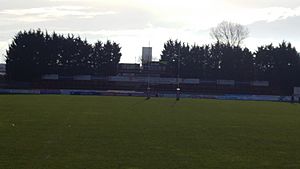 Capacity- (standing)
There is currently a small stand in the south end of the ground that goes around where the athletic track was. While the stand has fallen out of usage, it is opened up for games with high attendance, for example, derby games. Future plans are to build a permanent stand behind the sticks for away fans.

On 25 January 2014, Hull Kingston Rovers announced that it had secured a new stadium naming rights partnership with local communications provider, KC. Under a five-year agreement, Craven Park was renamed the KC Lightstream Stadium (following re-branding, it became the KCOM Lightstream Stadium), not to be confused with the KCOM Stadium in the west of the city. On 3 February 2017, it was renamed again, and is now known as KCOM Craven Park.

On 21 October 2015, it was announced that Non-League football team Hull United A.F.C. will play their home games at the stadium.

The greyhound racing operation followed Hull Kingston Rovers to their new home from Old Craven Park after it closed in 1989. The first race meeting was held on 11 November 1989. The management team of John Kennedy and Roy Thickett had overseen the move and set up racing for Monday, Thursday and Saturday nights. The new circuit had a circumference of 415 metres and race distances of 290, 462, 490, 655 & 705 metres. Prentice Racing came in as new promoters during the nineties but the racing switched to the Boulevard Stadium in 2003. Both the speedway and greyhound tracks were grassed over.

Speedway arrived in 1995 hosting the Hull Vikings but finished in 2005.

In 2015, Craven Park hosted the 'Rumble on the Humber', where after ten rounds, Olympic gold medalist Luke Campbell defeated local rival Tommy Coyle, with crowds numbering around about 15,000.

All content from Kiddle encyclopedia articles (including the article images and facts) can be freely used under Attribution-ShareAlike license, unless stated otherwise. Cite this article:
Craven Park, Hull Facts for Kids. Kiddle Encyclopedia.