Green Head is a small Australian coastal town in the Shire of Coorow. The town is situated between Geraldton and Perth in the Mid West region of Western Australia along Indian Ocean Drive. Its beaches and lifestyle provide a relaxed holiday atmosphere. It is the home of what was a significant, but now declining, rock lobster industry.

The first Europeans known to visit the Green Head coast were Dutch sailors in the 1600s, sailing to Indonesia for trade. Several Dutch ships were wrecked on the Western Australian reefs, among them the Vergulde Draeck (Gilt Dragon). Abraham Leeman and crew from the Waeckende Boey, while searching in the ship's small boat for survivors of the Vergulde Draeck, were marooned on Fishermans Island just south of Green Head in 1658.

The town was named after the nearby headland, which was originally named in 1875 by Staff-Commander William Edwin Archdeacon R.N., who was in charge of the Admiralty survey of the coast of Western Australia. The name is descriptive. Land was set aside for a camping reserve in 1946 and the popularity of the area led to a demand for building blocks in the 1950s. Lots were surveyed in 1959 and the townsite was gazetted on 7 January 1966. 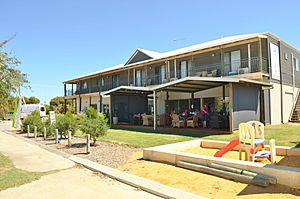 Green Head is a popular tourist destination and has a number of accommodation choices.

Local attractions include sea lions a short boat ride off the Green Head coastline at North Fishermans Island, which hosts the second largest population of sea lions on the Mid West coast. Numbers fluctuate between 40 and 80,depending on the breeding cycle. Interaction can be experienced with these inquisitive mammals by a government licensed charter.

Green Head has numerous vantage points for beach fishing, where catches include whiting, herring, tailor, skippy, and cobbler. Two recreational boat ramps service the town, one near the jetty and the other at South Bay for smaller boats. A boat provides access to a variety of fish as well as the local crayfish (rock-lobster).

There is one main paddle-out surf break at Point Louise, best suited for beginners or malibu riders when the swell is under two metres. Swells bigger than 2 metres create a more powerful wave that suits intermediate to advanced surfers. Green Head has many options to explore off-shore reefs for waves but require use of a boat.

Green Head is a well known sailboarding destination thanks to the strong sea breeze that blows from December until February. Although popular amongst the windsurfing community it still remains relatively uncrowded. Sandboarding is another activity available with specific beaches to sandboard where sand erosion is not a problem.

The Green Head town site is surrounded by nature reserves and a national park. Lesueur National Park covers 2,700 hectares and is renowned for its diversity of wild flowers. 1200 species have been identified but not surprisingly there are still over 300 species to be identified. The Department of Environment and Conservation improved infrastructure by installing a bitumen loop road for access to the unique flora and fauna. The best period to see the wildflowers in bloom is from August through until October.

The warm Leeuwin Current from the north brings tropical sea life that swims with temperate species, creating a diverse diving environment offshore. Hard and soft corals, along with sponges, cover the numerous limestone reefs. Seagrass meadows and the absence of rivers flowing into the sea allows for very healthy conditions for marine life.

Dynamite Bay is an almost circular bay in Green Head that is sheltered from the strong winds off the coast by a low lying rocky cliff that circles the beach. Snorkelling, swimming and wind-surfing are popular activities in the area.

Point Louise, Green Head's main surf break, is also a good location for snorkeling with clear water is very clear and there is more than enough reef to explore it all. Further north are numerous bays ideal for snorkelling, kayaking, swimming and picnic areas with picnic tables.

A well maintained gravel road accesses the bays, which were once dominated by squatters' shacks, built since the 1950s. Shack removal in the Shire of Coorow in 1994 enabled development of the coastal drive and a series of recreational sites adjacent to Green Head.

All content from Kiddle encyclopedia articles (including the article images and facts) can be freely used under Attribution-ShareAlike license, unless stated otherwise. Cite this article:
Green Head, Western Australia Facts for Kids. Kiddle Encyclopedia.