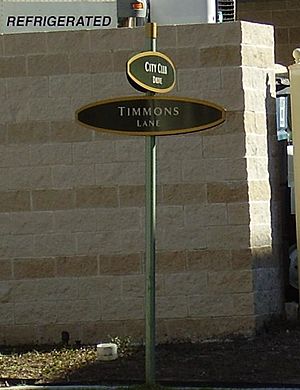 Greenway Plaza is located next to Lakewood Church. This facility was formerly called "The Summit" and later "Compaq Center" and hosted the Houston Rockets, a professional basketball team, as well as other sporting teams, concerts, and events. Privately owned residential condominiums are also located near Greenway Plaza, just west of Timmons Lane. The Greenway condominiums consist of two 30-story buildings (14 & 15 Greenway Plaza) located at the southwest periphery of the development.

Century took realtors from outlying towns around Houston and had them buy individual parcels for very inexpensive prices while trying not to attract attention. One homeowner found out about the plan and asked to have the house sold for $350,000. At the time it was a lot of money for a house that was small. The company paid the money so it could secure the tract the house sat on. The grand opening took place in 1973. Schnitzer said that Greenway Plaza would become a "second downtown". Bill Schadewald of the Houston Press said that Greenway Plaza, which housed office towers, retail operations, a basketball arena, a movie theater, and a hotel, "defined the multiuse concept in an original "Edge City"".

In 1970 the M. W. Kellogg company had moved its headquarters from New York to Houston. After Kellogg moved its operations into Greenway Plaza, initially Kellogg occupied half of 3 Greenway Plaza and staffed the half with fewer than 600 employees. When the energy industry expanded worldwide, Kellogg occupied all of 3 Greenway Plaza and space in an adjacent building. Kellogg's lease on July 1, 1991 was up for renewal; if Kellogg had renewed the lease, its rent payment would have increased. Instead Kellogg decided to swap office space with its parent company, Dresser Industries. Dresser took over a part of Kellogg's lease and renamed 3 Greenway Plaza to the Dresser Tower. After the swap Dresser occupied 163,000 sq ft (15,100 m2) of space on eight floors, while Kellogg continued to lease six floors in the building. In exchange Kellogg took space formerly held by Dresser at the M. W. Kellogg Tower in the Cullen Center in Downtown Houston. The swap satisfied Dresser's need for less space.

In 2004 Crescent attempted to sell a 50% equity position in both Greenway Plaza and Houston Center. During that year, El Paso Corp., a major tenant with 912,000 sq ft (84,700 m2) in Greenway Plaza, announced that it was vacating the property and moving its personnel to its Downtown Houston headquarters. A Houston Business Journal article stated that El Paso was expected to sublease the space until 2014, when its lease will expire.

In 2005 the internet service provider Internet America had offices in Greenway Plaza.

During the afternoon of Monday July 29, 2013, Cousins Properties, a company based in Atlanta, announced that it was buying the entire Greenway Plaza complex and a Downtown Fort Worth office tower. Nancy Sarnoff of the Houston Chronicle stated that Cousins was expected to pay $1.1 billion in cash.

At one time Delta Air Lines had offices in this building.

Prior to January 1, 2008, Landmark Theatres operated the Landmark Greenway, an "arthouse" theater inside 5 Greenway. Landmark's lease expired and the Greenway Plaza did not renew the lease. December 31, 2007 was the final day of operation for the theater. As of 2016 it will be replaced by a fitness area.

At one time the building housed Rao's Maremma Ristorante.

All content from Kiddle encyclopedia articles (including the article images and facts) can be freely used under Attribution-ShareAlike license, unless stated otherwise. Cite this article:
Greenway Plaza Facts for Kids. Kiddle Encyclopedia.