Grey Point Fort (map reference ) is a battery located at Helen's Bay on the south side of Belfast Lough. It was part of the defences of Belfast.

The battery was armed with two 6-inch Mark VII Breech loading guns. During the First World War additional buildings were constructed to provide accommodation for men of Kitchener's Army. Following the war, the battery remained in use with two coastal defence search lights being installed in 1936. 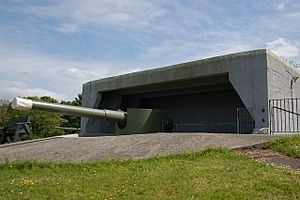 During the Second World War, it was manned by a Territorial Army unit, the 525th (Antrim) Coast Regiment, Royal Artillery. Concrete overhead covers were added to both gun positions. Following the war. the battery continued to be maintained with a mobile radar being installed in 1954.

On the abolition of coast artillery in 1956 the fort was disarmed. Between 1992 and 1996 original guns were obtained and installed from fortifications in Cork – one from Fort Mitchel on Spike Island, County Cork and the other from Fort Davis, County Cork. Since 2008 the Fort has been opened by the Grey Point Amateur Radio Society.

All content from Kiddle encyclopedia articles (including the article images and facts) can be freely used under Attribution-ShareAlike license, unless stated otherwise. Cite this article:
Grey Point Fort Facts for Kids. Kiddle Encyclopedia.