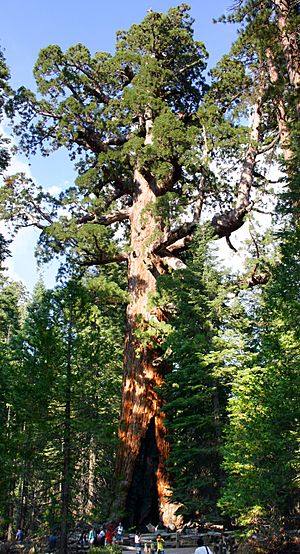 The Grizzly Giant, a giant sequoia, is among the most popular attractions in Yosemite National Park's Mariposa Grove.

The Grizzly Giant is a giant sequoia in Mariposa Grove, located in Yosemite National Park. The tree has been measured many times, most recently in 1990 by Wendell Flint. It has a volume of 34,005 cubic feet (962.9 m3), which makes it the 26th largest giant sequoia living today and could be considered the 25th largest depending on how badly Ishi Giant atrophied during the Rough Fire in 2015.

The Mariposa Grove was first visited by non-natives in 1857 when Galen Clark and Milton Mann found it. They named the grove after Mariposa County, California, in which the grove is located. Nearby trees include the California tree, which has a hole cut through it. Mariposa Grove is the largest grove of giant sequoias in Yosemite National Park, with several hundred mature examples of the tree. Two of its trees (the Washington tree and the Grizzly Giant) are among the largest giant sequoias in the world.

All content from Kiddle encyclopedia articles (including the article images and facts) can be freely used under Attribution-ShareAlike license, unless stated otherwise. Cite this article:
Grizzly Giant Facts for Kids. Kiddle Encyclopedia.