Grosvenor Square is a Victorian square, laid out in the 1850s, located in the suburb of Rathmines, Dublin 6, Ireland. While construction of the houses commenced in the late 1850s it continued on a piecemeal basis for the next four decades with all of the houses being completed by the beginning of the 20th century. The housing on the square is generally more modest in size and design than the nearby Kenilworth Square.

Located in the central green of the square are Kenilworth Bowling Club and Stratford Lawn Tennis Club.

Leinster Cricket Club originally played matches in the square before moving to Observatory Lane in 1865.

Grosvenor Park, Grosvenor Lane, Grosvenor Place and Grosvenor Road are also located near the square in Rathmines and Rathgar. 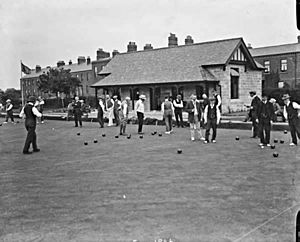 Kenilworth Bowling Club players at its Grosvenor Square clubhouse in 1920

All content from Kiddle encyclopedia articles (including the article images and facts) can be freely used under Attribution-ShareAlike license, unless stated otherwise. Cite this article:
Grosvenor Square, Dublin Facts for Kids. Kiddle Encyclopedia.