Rathmines (Irish: Ráth Maonais, meaning ringfort of Maonas) is an inner suburb on the southside of Dublin, about 3 kilometres south of the city centre. It effectively begins at the south side of the Grand Canal and stretches along the Rathmines Road as far as Rathgar to the south, Ranelagh to the east and Harold's Cross to the west. It is situated in the city's D6 postal district.

Rathmines has thriving commercial and civil activity and is well-known across Ireland as part of a traditional "flatland" - providing rented accommodation to newly arrived junior civil servants and third level students coming from outside the city since the 1930s. In more recent times, Rathmines has diversified its housing stock and many houses have been gentrified by the wealthier beneficiaries of Ireland's economic boom of the 1990s. Rathmines, nonetheless, is often said to have a cosmopolitan air, and has a diverse international population and has always been home to groups of new immigrant communities and indigenous ethnic minorities.

Rathmines is an Anglicisation of the Irish Ráth Maonais, meaning "ringfort of Maonas"/"fort of Maonas". The name Maonas is perhaps derived from Maoghnes or the Norman name de Meones, after the de Meones family who settled in Dublin about 1280; Elrington Ball states that the earlier version of the name was Meonesrath, which supports the theory that it was named after the family. Like many of the surrounding areas, it arose from a fortified structure which would have been the centre of civic and commercial activity from the Norman invasion of Ireland in the 12th century. Rathgar, Baggotrath and Rathfarnham are further examples of Dublin placenames deriving from a similar root. 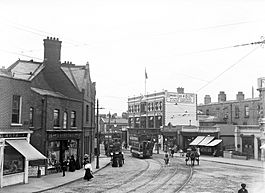 Rathmines has a long history stretching back to the 14th century. At this time, Rathmines and surrounding hinterland were part of the ecclesiastical lands called Cuallu or Cuallan, later the vast Parish of Cullenswood, which gave its name to a nearby area. Cuallu is mentioned in local surveys from 1326 as part of the manor of St. Sepulchre (the estate, or rather liberty, of the Archbishop of Dublin, whose seat as a Canon of St. Patrick's Cathedral takes its name from this). There is some evidence of an established settlement around a rath as far back as 1350. Rathmines is part of the Barony of Uppercross, one of the many baronies surrounding the old city of Dublin, bound as it was by walls, some of which are still visible. In more recent times, Rathmines was a popular suburb of Dublin, attracting the wealthy and powerful seeking refuge from the poor living conditions of the city from the middle of the 19th century. A substantial mansion, generally called Rathmines Old Castle, was built in the seventeenth century, probably at present day Palmerstown Park, and rebuilt in the eighteenth; no trace of it survives today.

Arguably, Rathmines is best known historically for a bloody battle that took place there in 1649, during the Cromwellian conquest of Ireland, leading to the death of perhaps up to 5,000 people. The Battle of Rathmines took place on 2 August 1649 and led to the routing of Royalist forces in Ireland shortly after this time. Some have compared the Battle of Rathmines - or sometimes Baggotrath - as equal in political importance to England's Battle of Naseby.

In the early 1790s the Grand Canal was constructed on the northern edge of Rathmines, connecting Rathmines with Portobello via the La Touch Bridge (which through popular usage became better known as Portobello Bridge).

For several hundred years Rathmines was the location of a "spa" - in fact a spring - the water of which was said to have health-giving properties. It attracted people with all manners of ailments to the area. In the 19th century it was called the "Grattan Spa", as it was located on property once belonging to Henry Grattan, close to Portobello Bridge. The "spa" gradually fell into a state of neglect as the century progressed, until disputes arose between those who wished to preserve it and those (mainly developers) who wished to get rid of it altogether. In 1872 a Dr. O'Leary, who held a high estimate of the water quality, reported that the "spa" was in "a most disgraceful state of repair", upon which the developer and alderman Frederick Stokes sent samples to the medical inspector, Dr. Cameron, for analysis. Dr. Cameron, a great lover of authority, reported: "It was, in all probability, merely the drainings of some ancient disused sewer, not a chalybeate spring". Access to the site was blocked up and the once popular "spa" faded from public memory.

The Westminster parliamentary borough of Rathmines had a unionist majority up to independence in 1922. The last Member of Parliament it returned was Maurice Dockrell.

On 25 April 1916, during the Easter Rising, Captain John Bowen-Colthurst, an officer of the 3rd battalion Royal Irish Rifles, went on a raiding party in Rathmines holding Francis Sheehy-Skeffington as hostage. At Rathmines Road he shot dead 19-year-old James Joseph Coade of 28 Mountpleasant Avenue. Coade had been attending a Sodality meeting at the nearby Catholic Church of Our Lady of Refuge. Sheehy-Skeffington was later shot dead in Portobello Barracks.

Rathmines Church was used as a weapons store during the War of Independence. On 26 January 1920 a fire started at the electrical switchboard in the vestry. There were reports of several members of 'A' Company of the IRA Dublin Brigade entering the church during the fire to retrieve the weapons. The fire caused £30-35,000 worth of damage and completely the destroyed the dome.

During the Irish Civil War, Séamus Dwyer, a pro-treaty Sinn Féin politician, was shot dead in his shop at 5 Rathmines Terrace by an unknown gunman on 20 December 1922. He had been an intelligence officer with the Dublin Brigade of the IRA during the War of Independence.

Also during the Civil War, Thomas O'Leary, a member of the anti-Treaty IRA, was shot dead by the Free State Army. His body was found on the morning of 24 March 1923 "bathed in blood, and apparently riddled with bullets, at the edge of the footpath outside the walls of the Tranquilla Convent" (now Tranquilla Park). A monument was erected in 1933 to mark the spot where his body was found.

Dartry Road in Rathmines was the scene of the still-controversial killing of IRA member Timothy Coughlin by police informer Sean Harling on the evening of 28 January 1928. It happened opposite 'Woodpark Lodge', where Harling lived at the time.

The Rathmines Township was created by Act of Parliament in 1847, and its area was later renamed "Rathmines and Rathgar" and expanded to take in the areas of Rathgar, Ranelagh, Sallymount and Milltown. The township was initially responsible only for sanitation, but its powers were extended over time to cover most functions of local government. It became an urban district under the Local Government (Ireland) Act 1898, but was still usually called a "township". Initially the council was made up of local businessmen and other eminent figures; the franchise was extended in 1899 and the membership changed accordingly. The former Town Hall is still one of Rathmines' most prominent buildings with its clock tower. It was designed by Sir Thomas Drew and completed in 1899. It is now occupied by Rathmines College. 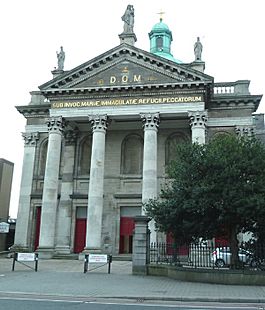 Rathmines is well known for the large army barracks which is located there, Cathal Brugha Barracks (known in the past as Portobello Barracks), home to many units of the Irish Army including the 2nd Infantry Battalion.

Another well known feature is the prominent copper dome of Mary Immaculate, Refuge of Sinners Church. The original dome was destroyed in a fire in 1920 and replaced by the current dome when reopened in 1922. The dome was to be used in St Petersburg but the political and social upheaval in this city caused it to be diverted to Dublin.

The Holy Trinity Church (Church of Ireland) was designed by John Semple (architect) (1801-1882) in the Gothic Revival style and consecrated on 1 June 1828. 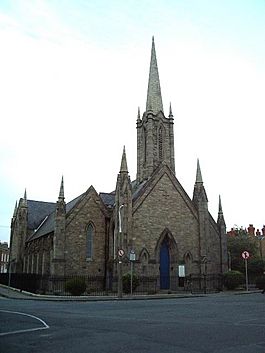 Rathmines Library was opened on 24 October 1913 following a grant of £8,500 from Andrew Carnegie, to a design by architect, Frederick Hicks.

Recently a new multiplex cinema has been added to the local shopping centre which is the first one in Dublin catering for Digital cinema . This has three screens with plans for a fourth, it shows up to date movies and features 3D movies.

From the 1850s horse-drawn omnibuses provided transport from Rathmines to the city centre. Portobello Bridge, which had a steep incline, was often a problem for the horses, which led to the fatal accident of 1861.

On 6 October 1871 work was commenced on the Dublin tram system on Rathmines Road, just before Portobello Bridge, and a horse-drawn tram service was in place the following year. The following year also the long-awaited (since the 1861 accident) improvements to Portobello Bridge were carried out, the Tramway Company paying one third of the total cost of £300.

Rathmines and Ranelagh railway station opened on 16 July 1896 and finally closed on 1 January 1959.

Rathmines is served by the Luas light rail system. Ranelagh on the Green Line is the most convenient for access to the main street, while the Charlemont and Beechwood stops are also within walking distance of the town.

All content from Kiddle encyclopedia articles (including the article images and facts) can be freely used under Attribution-ShareAlike license, unless stated otherwise. Cite this article:
Rathmines Facts for Kids. Kiddle Encyclopedia.