John Mitchel (3 November 1815 – 20 March 1875) was an Irish nationalist activist, author, and political journalist. Born in Camnish, near Dungiven, County Londonderry and reared in Newry, he became a leading member of both Young Ireland and the Irish Confederation. He was transported to Van Diemens Land and but later escaped to the United States in the 1850s, where he became a pro-slavery editorial voice.

Mitchel supported the Confederate States of America during the American Civil War, and two of his sons died fighting for the Confederate cause. He was elected to the House of Commons of the United Kingdom in 1875 but was disqualified because he was a convicted felon. His Jail Journal is one of Irish nationalism's most famous texts. 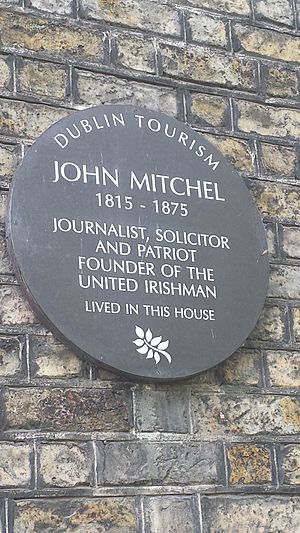 A statue to Mitchel was also erected by the people of Newry, and is located at John Mitchel Place, an extension of Newry's main street, Hill Street.

Mitchel Park is named after him in Dungiven, Northern Ireland, as is Mitchell County, Iowa, in the United States.

Fort Mitchel on Spike Island is named in his honour.

All content from Kiddle encyclopedia articles (including the article images and facts) can be freely used under Attribution-ShareAlike license, unless stated otherwise. Cite this article:
John Mitchel Facts for Kids. Kiddle Encyclopedia.