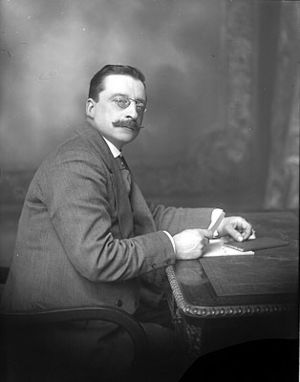 Arthur Griffith (Irish: Art Ó Gríobhtha; 31 March 1872 – 12 August 1922) was the founder of Sinn Fein, which became the political wing of the Irish Republican Army. Griffith said the Act of Union of Great Britain and Ireland in 1800 was illegal and that there should therefore be one government for Great Britain and another for Ireland. The King of Great Britain would also be King of Ireland.

Elected to the parliament in 1918, he was also responsible for the Anglo-Irish Treaty (1921) which helped set up the Irish Free State.

All content from Kiddle encyclopedia articles (including the article images and facts) can be freely used under Attribution-ShareAlike license, unless stated otherwise. Cite this article:
Arthur Griffith Facts for Kids. Kiddle Encyclopedia.