Dungiven (from Irish: Dún Geimhin, meaning "Gevin's fort") is a small town, townland and civil parish in County Londonderry, Northern Ireland. It is on the main A6 Belfast to Derry road. It lies where the rivers Roe, Owenreagh and Owenbeg meet at the foot of the 1,525 ft (465 m) Benbradagh. Nearby is the Glenshane Pass, where the road rises to over 1,000 ft (300 m). It had a population of 2,993 people in the 2001 Census, an increase of 6% over 1991. It is within Causeway Coast and Glens district.

Dungiven sprang up around Dungiven Castle and the Church of Ireland church at the eastern end of the town, later spreading westwards along Chapel Road and Main Street towards the bridging point on the River Roe. Because of the River Roe's flood plain and the line of a proposed by-pass, housing development has been mostly to the east and north of the town. It is an important service centre for the surrounding rural hinterland; offering educational, health, commercial, social, community and recreational facilities.

An interesting site in Dungiven is the 11th century Augustinian priory of St Mary's and the tomb of O'Cahan (Cooey na Gall O' Cahan), laid to rest in 1385. A thicket of thorn bushes hung with rags conceals a bullaun stone, visited for wart cures.

Between the 12th and 17th centuries the area was ruled by the Ó Catháin clan, one of the most influential clans in Ulster and respected throughout Ireland. In the early 17th century they built Dungiven Castle, which - having been substantially rebuilt in the 19th century - remains today as a restaurant and guesthouse. The world famous song Danny Boy is taken from a melody composed by the Ó Catháin bard, Ruairí Dall Ó Catháin. The original version concerns the passing of the Chief Cooey-na-Gall, whose death brought an end to the long line of O'Cahan chiefs.

Main page: The Troubles in Dungiven

During The Troubles in Northern Ireland seven people were killed in or near Dungiven in connection with the conflict, six of whom were members of the security forces. The one civilian, Francis McCloskey, was found beaten to death in disputed circumstances during street riots, in which the police were called to respond. He has sometimes been deemed as the first person killed in the last installment of the Troubles (1969-1997). 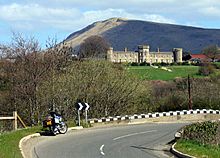 Dungiven is classified as an intermediate settlement by the NI Statistics and Research Agency (NISRA) (i.e. with population between 2,250 and 4,500 people). On Census day (29 April 2001) there were 2,993 people living in Dungiven. Of these:

Dungiven is mentioned in the Brian Friel play Making History, as the place where Mabel Bagnel goes after the Siege of Kinsale.

All content from Kiddle encyclopedia articles (including the article images and facts) can be freely used under Attribution-ShareAlike license, unless stated otherwise. Cite this article:
Dungiven Facts for Kids. Kiddle Encyclopedia.