Ranelagh ( RAN-ə-lə, locally pronounced Irish: Raghnallach) is a residential area and urban village on the south side of Dublin, Ireland. It is in the postal district of Dublin 6. 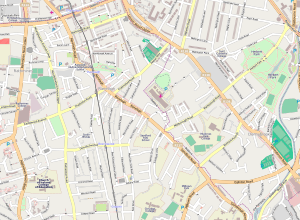 The district was originally a village just outside Dublin, surrounded by landed estates.

In the early years of the Irish Confederate Wars (1641–1649) the area was the scene of skirmishes culminating in the Battle of Rathmines in August 1649. After the Irish united with the Royalists against the Parliamentarians, an attempt was made to take Dublin. Their army under Ormonde was defeated, many of them killed, and the place where they fell (mainly between Rathmines and Ranelagh) was known for a long time as the Bloody Fields.

In 1785, only two years after the first manned flight, Richard Crosbie successfully flew in a hot air balloon from Ranelagh Gardens to Clontarf. The 225th anniversary of his flight was commemorated with a balloon flight from the same gardens on 23 January 2010 although due to adverse weather the balloon did not take off.

The area was incorporated into the expanding city in the 19th century, after which massive development took place.

In March 2013, Lenny Abrahamson, Irish film and television director, filmed part of his movie "Frank" on Cowper Gardens and Park Drive of Ranelagh.

The park in London, Ranelagh Gardens, was named after Ranelagh House, home of the Cole family, who took their title (Earls of Ranelagh) from the district in County Dublin.

The name Ranelagh applies to many geographical features. The stretch of road joining Sandford Road (which begins at the corner of Anna Villa) to Ranelagh Road (which begins at the railway bridge) is known as Ranelagh or Ranelagh Village. The whole surrounding area is also popularly known as Ranelagh, stretching from Charlemont Bridge on the Grand Canal at the northern end of Ranelagh Road down to the junction with Milltown Road at the southern end of Sandford Road, and from Leeson Street to the East towards Rathmines to the West. At the centre of Ranelagh is "Ranelagh Triangle", semi-officially "the Angle", which is the junction of Ranelagh Village and Charleston Road. Nearby restaurant "Tribeca" references these geographical features (i.e., Tri-angle Be-low Ca-nal). To the North of the Triangle is the "Hill Area" of Ranelagh, which was the scene of Lee Dunne's novel, "Goodbye to the Hill". Ranelagh contains many fine Victorian streets such as those surrounding Mount Pleasant Square.

The townlands of Ranelagh North and Ranelagh South are in the civil parish of St. Peter's and in the barony of Uppercross. They are bounded on the north by Harcourt Road and Adelaide Road, on the east by Sussex Road and an old irregular boundary from there to Chelmsford Road, on the south by Chelmsford Road, Ranelagh Village, Charleston Road, Oakley Road and Dunville Avenue, and on the west by Beechwood Park, Belgrave Square East, Mountpleasant Avenue Upper, Bessborough Parade, Rathmines Road Lower and Richmond Street South. The area popularly known today as Ranelagh also includes parts of the adjoining townlands of Cullenswood, Sallymount and Milltown. [1]

Ranelagh is in the local government electoral area of Pembroke/Rathmines, which is to be reconfigured as Rathgar-Rathmines Local Electoral Area with effect from May 2014. It is located in the Dáil Constituency of Dublin South-East, which is renamed Dublin Bay South with effect from the 2016 General Election.

All content from Kiddle encyclopedia articles (including the article images and facts) can be freely used under Attribution-ShareAlike license, unless stated otherwise. Cite this article:
Ranelagh Facts for Kids. Kiddle Encyclopedia.