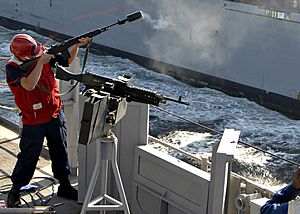 A Gunner's Mate fires a shot line with an M14 rifle from the USS Carter Hall to USNS Lewis and Clark (T-AKE-1).

The United States Navy occupational rating of gunner's mate (GM) is given by the Bureau of Naval Personnel (BUPERS) to enlisted sailors. They must either complete school training or by showing they are familiar with the field of ordnance.

The Gunner's Mate school is held at Naval Training Center Great Lakes, Illinois. The school was originally very hands-on. It is now primarily conducted through self-study computer-based training (CBT). The training focuses on the operation, maintenance, and troubleshooting of Naval guns, missile launchers, and torpedoes. It has a strong emphasis on basic explosives, guidance and tracking systems, small arms, Naval ammunition classification, and safety. Upon completion of this school enlisted members often continue on to a specialized school. At the specialized school they learn a particular weapons system.

All content from Kiddle encyclopedia articles (including the article images and facts) can be freely used under Attribution-ShareAlike license, unless stated otherwise. Cite this article:
Gunner's mate Facts for Kids. Kiddle Encyclopedia.