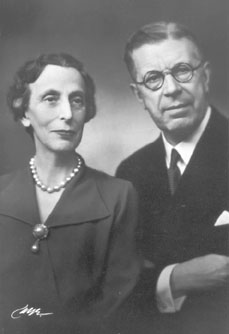 Gustav VI was the eldest son of Gustav V and his wife, Victoria of Baden. Before becoming king he had been Crown Prince of Sweden. During this long period of time he became a scholar and an archaeologist. He was also a well regarded expert on Chinese art. At his death he left his large collection of Chinese art to the Museum of Far Eastern Antiquities (Östasiatiska Museet) in Stockholm, Sweden. In World War II Gustav, as Crown Prince, spoke out publicly against sending Jews to Auschwitz. This was after the public learned of the extermination camps in Germany. He was the last king to rule under a Constitutional Monarchy with any power. Gustav VI died in 1973. His grandson, Carl XVI Gustav, succeeded him as king.

Gustav VI married Margaret of Connaught in 1905. She died in 1920. Together they had four sons and one daughter:

All content from Kiddle encyclopedia articles (including the article images and facts) can be freely used under Attribution-ShareAlike license, unless stated otherwise. Cite this article:
Gustav VI Adolf of Sweden Facts for Kids. Kiddle Encyclopedia.