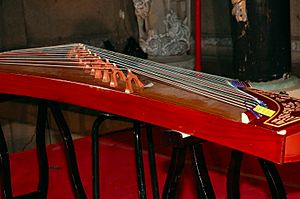 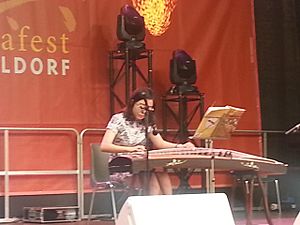 It has 16 (or more) strings and movable bridges. The modern guzheng usually has 21 strings, and is 64 inches (1,600 mm) long. It has a large, resonant cavity made from wutong wood. Other components are often made from other woods for structural or decorative reasons. Guzheng players often wear fingerpicks, made from materials such as ivory, tortoiseshell, resin or hard plastic, on one or both hands.

The guzheng is ancestral to several other Asian zithers, such as the Japanese koto, the Korean gayageum, Mongolian yatga, and the Vietnamese đàn tranh. The guzheng should not be confused with the guqin (another ancient Chinese zither without moveable bridges).

An early guzheng emerged during the Warring States period (475–221 BC). It became prominent during the Qin dynasty (221–206), and by the Tang Dynasty (618–907 AD), the guzheng may have been the most commonly played instrument in China. The guzheng was originally developed from a bamboo-tube zither according to the Shuowen, but this came to be replaced by a larger curved wooden board with movable bridges.

Strings, once made of silk, are almost always steel coated in nylon (increasing the instrument's volume and changing its timbre).

All content from Kiddle encyclopedia articles (including the article images and facts) can be freely used under Attribution-ShareAlike license, unless stated otherwise. Cite this article:
Guzheng Facts for Kids. Kiddle Encyclopedia.