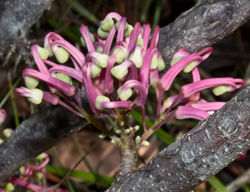 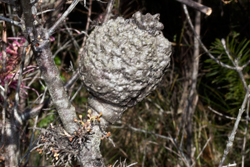 Hakea bakeriana is a shrub in the family Proteaceae and is endemic to the Central Coast of New South Wales. It is a dense shrub with sharply pointed, cylinder-shaped leaves and pink to crimson flowers in groups of between four and twelve. The fruit is a rough, wrinkled follicle which terminates in a short beak.

This species was first formally described by Ferdinand von Mueller and Joseph Maiden in 1892 from a specimen collected on "a barren patch of ground close to the bank of a creek at Wallsend". The description was published in the Macleay Memorial Volume of the Linnean Society of New South Wales. The specific epithet honours Richard Thomas Baker, teacher, economic botanist and later a curator of Sydney's Technological Museum.

Hakea bakeriana grows in heath, sclerophyll forest and in dry forests on the coast and nearby ranges of New South Wales between Newcastle and Glenorie.

Hakes bakeriana has been grown for many years by native plant enthusiasts and is hardy in a range of soils and climates although does best in a sunny position. It is easily grown from seed but because of the species' restricted distribution, seed may be difficult to obtain.

All content from Kiddle encyclopedia articles (including the article images and facts) can be freely used under Attribution-ShareAlike license, unless stated otherwise. Cite this article:
Hakea bakeriana Facts for Kids. Kiddle Encyclopedia.