Hallettsville is a city in Lavaca County, Texas, United States. The population was 2,550 at the 2010 census. It is the county seat of Lavaca County. 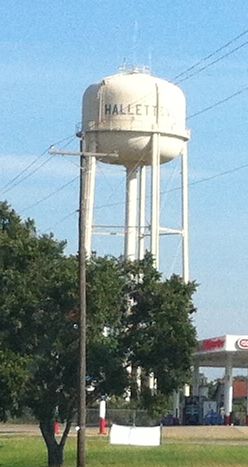 Hallettsville is named for an early founding family that colonized this area. John Hallett had received a land grant from Stephen F. Austin in 1831 and after his death in 1836 his wife, Margaret Hallett, donated the land for the town's location.

A few of the early settlers of the Hallettsville area include Collatinus Ballard, M. B. Bennett, A. W. Hicks, David Ives, Ira McDaniel, and William Smeathers.

According to the United States Census Bureau, the city has a total area of 2.2 square miles (5.7 km2), all of it land.

There were 1,019 households out of which 29.9% had children under the age of 18 living with them, 44.0% were married couples living together, 14.6% had a female householder with no husband present, and 38.4% were non-families. 35.6% of all households were made up of individuals and 21.3% had someone living alone who was 65 years of age or older. The average household size was 2.29 and the average family size was 3.00.

The town is home to the Texas Championship Domino Hall of Fame and also hosts a dominoes tournament every year in January. It also hosts its annual Kolache Fest and Fiddler's Frolic events every September and April.

Although the actual town involved in the real story of the "Chicken Ranch" is located a few miles north of Hallettsville on Highway 77, film makers chose the town's historic Lavaca County Courthouse square to serve as backdrop for the city scenes in The Best Little Whorehouse in Texas,the 1982 musical starring Burt Reynolds and Dolly Parton.

Hallettsville is also the featured location in the 2009 horror film titled Hallettsville, which stars Gary Busey and Derek Lee Nixon.

The town is mentioned in the Robert Earl Keen song "Armadillo Jackel" as the place where they pay $2.50 for dead armadillos.

The climate in this area is characterized by hot, humid summers and generally mild to cool winters. According to the Köppen Climate Classification system, Hallettsville has a humid subtropical climate, abbreviated "Cfa" on climate maps.

All content from Kiddle encyclopedia articles (including the article images and facts) can be freely used under Attribution-ShareAlike license, unless stated otherwise. Cite this article:
Hallettsville, Texas Facts for Kids. Kiddle Encyclopedia.