Hamamelis vernalis (Ozark witchhazel) is a species of witch-hazel native to the Ozark Plateau in central North America, in Missouri, Oklahoma, and Arkansas.

It is a deciduous large shrub growing to 4 m tall, spreading by stoloniferous root sprouts. The leaves are oval, 7–13 cm (2.8–5.1 in) long and 6.7–13 cm (2.6–5.1 in) broad, cuneate to slightly oblique at the base, acute or rounded at the apex, with a wavy-toothed or shallowly lobed margin, and a short, stout petiole 7–15 mm (0.28–0.59 in) long; they are dark green above, and glaucous beneath, and often persist into the early winter. The flowers are deep to bright red, rarely yellow, with four ribbon-shaped petals 7–10 mm (0.28–0.39 in) long and four short stamens, and grow in clusters; flowering begins in mid winter and continues until early spring (the Latin word vernalis means "spring-flowering"). The fruit is a hard woody capsule 10–15 mm (0.39–0.59 in) long, which splits explosively at the apex at maturity one year after pollination, ejecting the two shiny black seeds up to 10 m (33 ft) distant from the parent plant. Although often occurring with the related Hamamelis virginiana, it does not intergrade, and can be distinguished by its flowering in late winter (December to March in its native range), not fall. 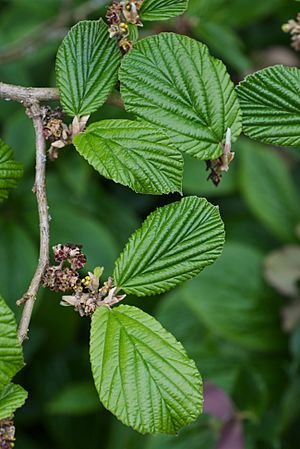 H. vernalis is valued in cultivation for its strongly scented flowers appearing in late winter, when little else is growing. Several cultivars have been selected, mainly for variation in flower color, including 'Carnea' (pink flowers), 'Red Imp' (petals red with orange tips), and 'Squib' (vivid yellow flowers).

All content from Kiddle encyclopedia articles (including the article images and facts) can be freely used under Attribution-ShareAlike license, unless stated otherwise. Cite this article:
Hamamelis vernalis Facts for Kids. Kiddle Encyclopedia.