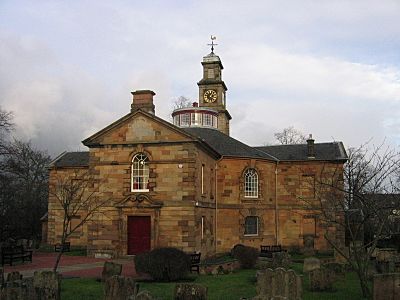 The Old Parish Church from the rear

Hamilton Old Parish Church is a Church of Scotland parish church serving part of the Burgh of Hamilton in South Lanarkshire, Scotland. It is notable for its Georgian architecture.

It was built in 1734, replacing the parish's 15th-century Collegiate Church, which was located at another site, close to the mausoleum in Strathclyde Park. The church is an unusual, largely circular design. It is the only church building to have been designed by the architect William Adam.

The current minister is the Reverend Ross Blackman BSc MBA BD(Honours), who was Ordained and Inducted on 19 November 2015. Mr Blackman studied at Highland Theological College and University of Glasgow. The previous ministers include: Rev John Thomson (2001-2014), and Rev Dr Hugh Wyllie, who was Moderator of the General Assembly of the Church of Scotland in 1992. Dr Wyllie is one of three ministers of Hamilton Old to have served as Moderator of the General Assembly since the end of the Second World War, the others being Matthew Stewart in 1947 and John Fraser in 1958.

Until 1960 this was a collegiate charge with two ministers. After this date John McKechnie, who had been minister of the second charge, became minister of the united charge. There were also two buildings - the Old Church and Auchingramont Church. Auchingramont Church was closed during the ministry of Douglas Macnaughton, who succeeded John McKechnie.

All content from Kiddle encyclopedia articles (including the article images and facts) can be freely used under Attribution-ShareAlike license, unless stated otherwise. Cite this article:
Hamilton Old Parish Church Facts for Kids. Kiddle Encyclopedia.