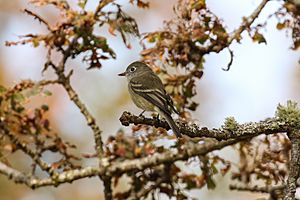 Hammond's flycatcher (Empidonax hammondii) is a flycatcher in the family Tyrannidae. This small insectivorous bird inhabits the coniferous and mixed forests of western North America. The name of this bird commemorates William Alexander Hammond who was the surgeon general of the US Army. Hammond collected bird specimens for Spencer Fullerton Baird.

Adults are 12–14 cm long (4.7-5.5 in), span about 22 cm (8.7 in) across the wing and weigh 8-12 g (0.3-04 oz). They have grayish-olive upperparts, darker on the wings and tail, with whitish underparts; they have a conspicuous white eye ring, white wing bars, a small bill and a short tail. The breast is washed with grey and the sides of the belly with yellow. Female usually have a shorter, wider bill compare with male's. Immature are similar to adults, but have broader wing bars and are more buff.

The Hammond's flycatcher is a migratory species, breeding in Western North America and wintering in Mexico and Central America.

Their preferred breeding habitats are mature coniferous and mixed forests. They are typically found in dense fir forests, conifer and aspen forests and dogwood. Their habitats on wintering grounds are similar to the ones used as breeding grounds.

Hammond's flycatchers can be found in the Western United States, including Montana, Wyoming, California, Nevada, Utah, Arizona, New Mexico and Colorado. In Canada, their range include British Columbia, Yukon and Alberta. Certain birds have been found as far North as Alaska. Overall, their breeding range is formed by regions that have been greatly influenced by past glaciation events. These birds are migratory and winter in Mexico and in Central America.

The song is a multi versed hoarse ssilit, greeep, silit, pweet. The call is a sharp peek.

Hammond's flycatchers do not sing during the fall migration or on wintering grounds. They start singing in early May, shortly after their arrival on breeding grounds. The frequency of the song is usually higher at the beginning of the mating season and drops as summer progresses; males that do not have a partner sing more often and at a higher frequency than paired males.

Like in other species of the genus Empidonax, bill snapping and mandibles clicking are commonly used in a threatening context.

Their favorite preys include beetles, flies, bees, butterflies and moths, with a mean length of 5.7 mm and a mean weight of 1.656 mg. True beetles, and net-winged insects can also be part of their diet. They wait on an open perch high or in the middle of a tree and fly out to catch insects in flight, (hawking), also sometimes picking insects from foliage while hovering, (gleaning).

These birds are believed to be monogamous and show no evidence of extra-pair copulation. Male Hammond's flycatcher physically fight at the beginning of the breeding season, locking themselves together in midair and fluttering to the ground. They tend to nest on high, small to medium-sized branches of tall trees. They also prefer areas where they can be covered by leaves, on the northeast or southwest sides of trees. Finally, they prefer old-growth forest, with a minimum age of 80 to 90 years.

They make a cup nest on a fork in a tree. Females usually lay in early June three or four creamy white eggs, sometimes marked with small reddish-brown dots. The female incubates the eggs for about 15 days. The hatchlings are altricial; both the male and the female are responsible of feeding the young.

All content from Kiddle encyclopedia articles (including the article images and facts) can be freely used under Attribution-ShareAlike license, unless stated otherwise. Cite this article:
Hammond's flycatcher Facts for Kids. Kiddle Encyclopedia.