The American gray flycatcher is one of the many species in the genus Empidonax. These species are very similar in appearance and behavior, and they are notoriously difficult to differentiate. The best characteristics for distinguishing these species are voice, breeding habitat, and range. The American gray flycatcher, however, can be identified by a unique behavior, its downward tail wag. Other Empidonax species typically exhibit a rapid upward tail flick. 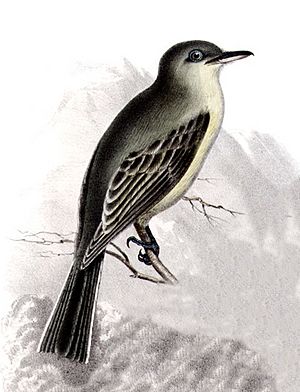 Adults have pale gray upperparts, darker on the wings and tail, with a faint olive tinge after molting in fall. Underparts are whitish, but washed slightly with yellow in fresh plumage. They have white wing bars and an inconspicuous white eye ring. There is a pale supraloral band stretching above the base of the bill. Relative to other North American Empidonax flycatchers, the American gray flycatcher has a long, narrow bill, a long tail, and the mandible tends to be paler for more of its length.

Juveniles are similar in appearance to adults, but with stronger olive and yellow tones. Also, young birds have buffy wing bars and brownish breasts.

Only the male sings. The song is a strong, two syllable note described as chuwip or wilip. A weaker, higher-pitched teeap or seep is often inserted into the song. Both sexes give a dry pit or wit call. Females call often when foraging or collecting nest materials.

There are no recognized subspecies, and there is no geographic variation reported.

In winter the American gray flycatcher is found in "arid open and semiopen areas with scrub and scattered trees".

The diet presumably consists entirely of insects and other small invertebrates. Fruit may be eaten in winter, but that has not been confirmed.

Most prey is taken in flight or from the ground. A bird will wait on an open perch – usually on a shrub or low tree branch – and fly out to catch a passing insect. Less commonly, a hovering bird gleans prey from foliage or bark.

The American gray flycatcher is territorial during the breeding season. Males establish a territory and attract a female through vocalizations and displays. They appear to be monogamous, but extra-pair copulations may occur.

The nest is bulky and less compact than those of other Empidonax flycatchers. The female builds the nest (males rarely help) from various plant materials, especially grass stalks and strips of bark. The nest is usually lined with softer materials, such as wool, hair, feathers, or soft grasses. Nests may be placed in sagebrush, bitterbrush, junipers, or pines. Nest height depends in part on the height of the substrate (i.e., nests tend to be higher in taller trees) but is usually 1–6 m (3.3–19.7 ft) above ground. Most nests are placed in the crotch of a branch next to the trunk, but some are situated on larger branches away from the trunk.

Females lay one egg per day, with a final clutch size of three or four. The female incubates the eggs for about two weeks. The eggs, although laid on different days, usually hatch on the same day. The chicks are altricial and have little down when they hatch. Both parents feed the nestlings. Fledging occurs about 16 days after hatching.

All content from Kiddle encyclopedia articles (including the article images and facts) can be freely used under Attribution-ShareAlike license, unless stated otherwise. Cite this article:
American gray flycatcher Facts for Kids. Kiddle Encyclopedia.