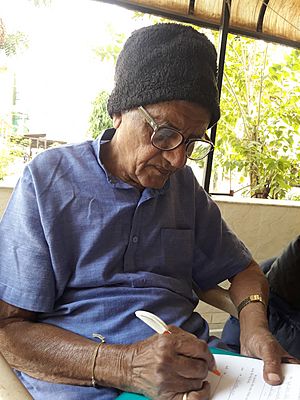 Harikrishna Pathak writing at his home, 2018

Pathak was born on 5 August 1938 at Botad (now in Gujarat, India) to Monghiben and Ramchandra. His family was from Bholad village in Ahmedabad district. He matriculated in 1956. He completed his B. Sc. from Gujarat University in 1961. He worked as a teacher at Songadh near Bhavnagar in 1961–62. In 1963, he joined Department of Revenues, Government of Gujarat as an assistant. He was later promoted as the divisional officer and later retired as the deputy secretary. He has managed literary groups such as Mijlas and Brihaspatisabha for years. He has also served as a vice president of Gujarati Sahitya Parishad. He is also painter, sketcher and singer.

Harikrishna Pathak has experimented with several genres of literature. His first work, a satire, Natakno Takhto was published in Chandani while his first poem was published in Kumar. Sooraj Kadach Uge (1974) was his first poetry collection which had 82 poems including metrical poetry, sonnets, songs, ghazals and free verse. It has traditional as well as experimental poems. Halavi Hawane Pankhe (2005), Tapu and Jalna Padgha are his other poetry collections. Adva Pachisi (1984) has parody poetry on human nature delivered through fictional character Advo. It has shades of burlesque.

Mor Banglo (1988) and Natubhaine To Jalsa Chhe (2008) are his story collections. Galine Nakethi (1993) is his collection of criticism. Nagar Vase Chhe (1978) has selected poems from Brihaspatisabha edited by him. He has also edited Gujarat Kavita Chayan (1994, 1996) as well as co-edited Swatantryottar Gujarati Geet Sanchay, Gurjar Navalika Chayan, Gurjar Adhunik Vivechan and Manubhai Trivedi - Sarod (2008). Aapni Yadi has poems of Kalapi selected by him. Raina Phool (2004) is his travelogue.

He married Chandrika in 1961 at Bhavnagar and has six children.

All content from Kiddle encyclopedia articles (including the article images and facts) can be freely used under Attribution-ShareAlike license, unless stated otherwise. Cite this article:
Harikrishna Pathak Facts for Kids. Kiddle Encyclopedia.