Hasselwood Rock is a skerry adjacent to Rockall in the North Atlantic.

The upper part of Hasselwood Rock is the destroyed cone of an extinct volcano, 200 metres (656 feet) north of the larger outcrop of Rockall.

The rock is approximately 1 metre (3 ft 3 in) above low water, and 13 metres (43 ft) in diameter, with an area of approximately 130 square metres (1,400 sq ft). It is covered at high tide and in heavy seas, often only visible as breaking waves. There are no sources of fresh water on the rock, which is uninhabitable. The only other rocks in the area, those of Helen's Reef, are almost 2 kilometres (1.2 mi) to the north-east.

Expeditions and landings have not been reported. The geological composition is unknown.

The brigantine Helen of Dundee, bound for Quebec, foundered at Hasselwood Rock in 1824; the vessel struck between nine and ten o'clock in the morning of 17 May. After some twelve hours struggling to keep her afloat and make for safety, water had almost filled the hold. The captain ordered the passengers onto the deck with warm clothing. Difficulty was experienced launching the boats, and one had to be repaired after being holed on the stock of the kedge anchor; "the crew left most of the passengers to drown, including seven women and six children".

On 28 June 1904, SS Norge, a Danish passenger liner, ran aground on Hasselwood Rock. Over 635 people died during the sinking, among them 225 Norwegians. 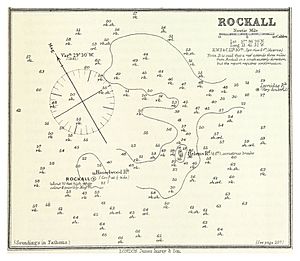 All content from Kiddle encyclopedia articles (including the article images and facts) can be freely used under Attribution-ShareAlike license, unless stated otherwise. Cite this article:
Hasselwood Rock Facts for Kids. Kiddle Encyclopedia.