Hastings Park is located in the northeast sector of Vancouver, British Columbia, Canada, in a neighbourhood called Hastings-Sunrise. Its name references the Hastings Townsite, part of which was also known as New Brighton, which lay at the end of the Douglas Road from New Westminster, founded as a resort and watering-hole and as a port to connect the other settlements of the inlet—Gastown, Moodyville and Barnet—to the city.

The land was originally granted in trust to the City by the Province in 1888 as part of the will of its late owner, with the site to be kept in perpetuity as wilderness park for public use. However, throughout most of the twentieth century, Hastings Park has been home to two institutions: the Pacific National Exhibition (PNE) and the Hastings Racecourse, and the PNE's amusement park, Playland. Over the years, the site lost its park character because of the construction of many buildings and parking lots. These included the long-vanished Exhibition Building, a Mission-style affair with ornate cupolas and decor, torn down by the 1920s due to structural inefficiencies. In its place three large art deco concrete buildings and one smaller one - the Showmart, Food Building and Forum and the Gardens, respectively.

Over time PNE facilities grew in the post-war period by the addition of the BC Building, housing the once-famous Challenger Relief Map of British Columbia and the Agrodome, plus the regular expansion of buildings and structures in Playland, most visibly its roller coaster, prominent on the eastern approach into the city via Hastings Street and via Highway 1, but also a vintage games arcade and electric bumper-car "rink". Next to it, in time for the British Empire Games hosted by Vancouver in 1954, was Empire Stadium, its concrete stands now a community track and sport facility. Added still later was the Pacific Coliseum, the park's largest single structure and for many years the city's largest indoor sports and entertainment venue (with Empire Stadium being the largest outdoor). Operations at the racecourse also expanded over times, with an extensive collection of horse barns and horse-trailer parking lots.

A Restoration Plan was prepared with the neighbourhood residents and approved by the City in 1997. 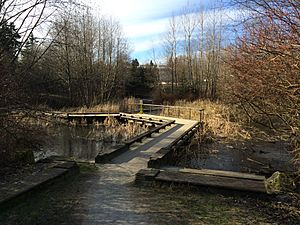 The sanctuary at Hastings Park was one of the many developments made between 1997 and 2001 in order to improve the facilities associated with the park. Within the sanctuary is a large pond surrounded by native plants and walkways. The sanctuary also supports many species of birds and small animals. Furthermore, the pond is stocked with rainbow trout that can be fished for off of a small dock at the northwest corner of the pond.

A recent development to this area is the Creekway Park, which is a daylighting stream that will connect the sanctuary to New Brighton Park. This project, which completed its first stage in September 2013, also includes new pedestrian and bicycle pathways between the two parks as well as providing an ecological corridor to the Burrard Inlet. The sanctuary area of the park continues to be developed.

All content from Kiddle encyclopedia articles (including the article images and facts) can be freely used under Attribution-ShareAlike license, unless stated otherwise. Cite this article:
Hastings Park Facts for Kids. Kiddle Encyclopedia.