Hastings Pier is a public pleasure pier in Hastings, East Sussex, England. Built in 1872 and enjoying its prime in the 1930s, it became a popular music venue in the 1960s. The structure suffered major storm damage in 1990, and was closed to the public for a time before closing completely in 2008, and 95% destroyed by a fire in 2010. Hastings Pier Charity oversaw a rebuilding project, with the pier reopening on 27 April 2016. The redeveloped pier won the 2017 Stirling Prize for architecture.

Hastings Pier after the 2016 redevelopment 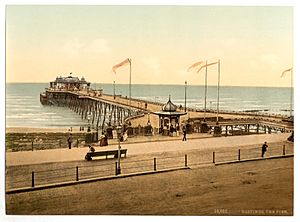 An early view of the pier

The pier was opened on 5 August 1872 by the then Lord Warden of the Cinque Ports, Earl of Granville. It was designed by Eugenius Birch, who also designed the West Pier, Brighton and Eastbourne Pier, both west of Hastings, and it is often seen as an innovative design considering the technical constraints of the late Victorian period. The pier was "constructed by a local company", while the contractors were the firm R Laidlaw & Son, Glasgow. 600 guests sat down to lunch on the pier immediately following the opening ceremony, and included the local member of parliament Thomas Brassey and Egyptian princes.

The original 2,000 seater pavilion was destroyed by fire in 1917. This was eventually replaced in 1922 and played host in the 1960s and the 1970s to notable artists such as The Rolling Stones, The Who, Jimi Hendrix, Genesis, Tom Jones, Ten Years After, and Pink Floyd. Pink Floyd founder Syd Barrett played his last show with the band here on 20 January 1968. 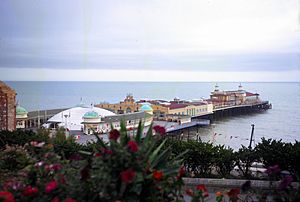 In 1966 the Hastings Embroidery was displayed in the white domed structure for the 900th anniversary celebrations of the Battle of Hastings.

During the 1930s, the pavilion extension buildings received an art deco facelift and a theatre rebuild. This was to be its prime era. More renovation followed its temporary closure during WWII and in 1966 it housed the Hastings Embroidery during the 900th anniversary celebrations of the Battle of Hastings.

Elements of the pier became listed in 1976 and subsequently changed hands on a regular basis with erratic structural renovation input from its subsequent owners.

In 1990 it suffered considerable storm damage, requiring a £1 million refurbishment. In 1996 it was put up for sale, but the future of the pier was put in grave doubt as interested buyers were reluctant to invest due to the serious amount of capital needed to improve the unstable structural supports. Financial losses led to the appointment of liquidators Leonard Curtis who closed the pier in 1999.

The pier was eventually sold in 2000 and reopened under new ownership in 2002. It was passed to Ravenclaw, an offshore enterprise in 2004. 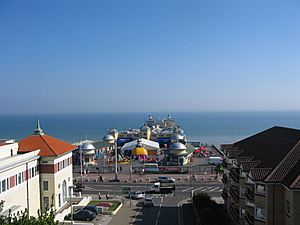 However, on 12 March 2008 the local newspaper Hastings Observer reported to concerned readers how storm damage had caused considerable damage and that two support columns were in imminent danger of collapse. To prevent public access and any resulting injuries, stronger barriers restricting public access to the damaged areas were put in place and repairs to the bracing fixtures prevented any disaster from occurring. Nevertheless, when the remaining major tenant closed for business, access to the pier was restricted. The failure of the owners to respond to appeals from the Council to repair the areas and the continual deterioration of the structure led to its long-term future becoming uncertain.

Efforts to save the pier

The Hastings Pier & White Rock Trust was established to raise funds through various means to renovate the pier, ranging from community fund raising (cup collecting, raffles and quiz nights etc.) to larger scale grant applications. Their long-term goal is to acquire the pier and form a not-for-profit company to renovate, reopen and revitalise the pier as a community owned asset. The Hastings Pier and White Rock Trust (HPWRT) strongly oppose to any decision to demolish and clear the site of the structure, which would cost an estimated £4 million of local money.

A protest march was held on 17 October 2009 as part of a campaign to save the pier.

In November 2009 the owners of The Grand Pier in Weston-super-Mare examined the possibility of purchasing Hastings Pier and restoring it to its former glory. However, after a structural assessment it was estimated that repairs would cost over £24 million, with a similar amount needed to restore attractions at the pier head. The structural engineers dismally commented that the pier was "one good storm away from collapse". 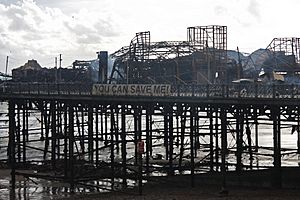 Hastings Pier after the 2010 fire

The pier suffered extensive fire damage during the early hours of Tuesday 5 October 2010. Although the fire brigade arrived shortly after being alerted (at approximately 0100 BST), the fire had quickly spread causing severe damage to the wooden buildings. Estimates indicate that 95% of the superstructure of the pier was subsequently destroyed in the fire. Two people were arrested on suspicion of arson, but, despite numerous bail hearings, no charges were made.

In August 2013, a compulsory purchase order was enacted and the pier was returned to local ownership which enabled a £14m renovation project to go forward. The work was completed in early 2016, and the pier was reopened to the public on 27 April 2016.

Since re-opening, the pier has won the National Piers Society's "Pier of the Year" award in 2017, with Worthing Pier and Llandudno Pier in second and third place.

The redeveloped pier was awarded the 2017 Stirling Prize for architecture, considered to be the most prestigious architecture award in the United Kingdom.

The organisation running the pier went into administration in November 2017, leaving the future of the pier uncertain.

Hastings Pier was purchased on 15 June 2018 by controversial local businessman Abid Gulzar, who also owns Eastbourne Pier. The pier re-opened on 25 July 2018. The pier closed in December 2018 and re-opened on 1 April 2019.

The pier has featured in many films and TV series, such as The Dark Man (1951), ITV wartime drama Foyle's War, Kingmaker's "Queen Jane" music video (1993), Ash's "Tracers" music video (2009), the film Byzantium (2012) and the British television series Giri/Haji (2019). In 2015 a feature-length documentary about Hastings Pier (titled Re: A Pier) was completed by filmmaker Archie Lauchlan.

All content from Kiddle encyclopedia articles (including the article images and facts) can be freely used under Attribution-ShareAlike license, unless stated otherwise. Cite this article:
Hastings Pier Facts for Kids. Kiddle Encyclopedia.