Haughville is a working-class neighborhood west of downtown Indianapolis. Its borders are roughly White River Parkway to the east, roughly Tibbs Avenue to the west, 10th Street to the north, and Michigan Street to the south. It suffers from a high crime rate and low property values. It is considered one of the most impoverished neighborhoods in the city.

A portion of the neighborhood, roughly bounded by 10th Street, Belleview Place, Walnut Street. and Concord Street, is listed on the National Register of Historic Places as the Haughville Historic District, a national historic district. The district encompasses 329 contributing buildings. This area is the site of the former housing project, Concord Village. The area was first settled in the 1830s, when it became home to a number of merchants, whose small shops sprouted up near the west landing of the then brand-new Washington Street Bridge over the White River. By the 1880s, encouraged by the bridge and proximity to a number of new railroad lines, the town became home to a number of Irish, German, and later Slovene immigrants, many of whom worked in the neighborhood's two iron foundries or in meat-packing plants. The area was incorporated in 1883 and annexed by Indianapolis in 1897. By 1900, almost half of the neighborhood's inhabitants were Slovene, many of whom attended St. Anthony's Catholic church. Due to tensions with the largely Irish population at St. Anthony's parish, the Slovenian community petitioned Vicar General Denis D. O'Donaghue to build their own church. Permission was received and Holy Trinity Slovenian Catholic Church began in April 1906. Holy Trinity is the only Slovenian Catholic in the United States and is also an international historical landmark. Holy Trinity eventually became home to a school, a number of local organizations and a Slovene community center. The church closed its doors in 2015. Indeed, the neighborhood's Slovene past is one of the reasons that Indianapolis has a sister-city relationship with Piran, Slovenia. The Slovenian National Home was formed in 1906 in a basement of a home across the street from Holy Trinity Slovenian Catholic Church as a place to congregate outside of church and home. Today the "Nash" is located at 2717 W. 10th street where it has been a pillar of the community since 1940. The National Home is a private club for Slovenian people, their descendants, and friends.

The Haughville Historic District was added to the National Register of Historic Places in 1992. 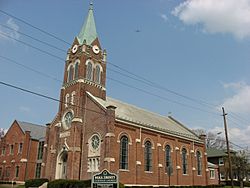 Holy Trinity Catholic Church, historically the center of the community

As of 2011, there were an estimated 8,043 people, a slight increase since 2000. However this represents the over Near Westside Weed and Seed incorporated, which incorporates the population of a small section of other neighborhoods surrounding Haughville. The official population of Haughville is estimated around 6,500 while the make up of Haughville (excluding Stringtown and other neighboring areas) is approximately 92 percent African-American or Black descent. The remaining percent of the area is said to be a mixture of White (Non-Hispanic) and an increasing Hispanic population.

All content from Kiddle encyclopedia articles (including the article images and facts) can be freely used under Attribution-ShareAlike license, unless stated otherwise. Cite this article:
Haughville, Indianapolis Facts for Kids. Kiddle Encyclopedia.