Hawkwind an English rock band. They are one of the earliest space rock groups. Their write and sing about science fiction themes. They formed in November 1969. Hawkwind have changed many times during their history and have played many styles of music. Dozens of musicians, dancers, and writers have worked with the group since they began.

Hawkwind have been named as an influence by artists such as the rock band Monster Magnet, the Sex Pistols (who covered their 1972 song, "Silver Machine"), Henry Rollins of Black Flag, the guitarist Ty Segall, and the English rock band, Ozric Tentacles. 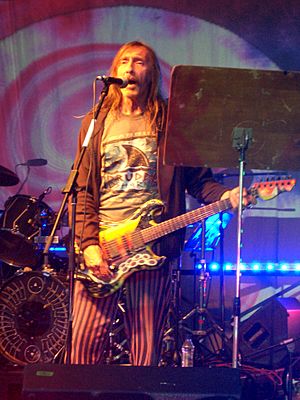 All content from Kiddle encyclopedia articles (including the article images and facts) can be freely used under Attribution-ShareAlike license, unless stated otherwise. Cite this article:
Hawkwind Facts for Kids. Kiddle Encyclopedia.