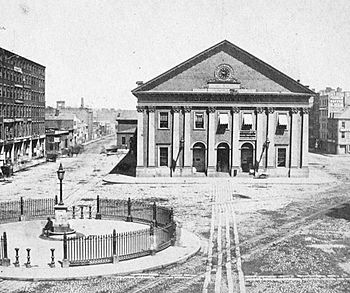 Haymarket Square is the historic name of a former town square in Boston, located between the North End, Government Center, the Bulfinch Triangle, and the West End. The square was a well-known feature of Boston from the mid-19th century to the mid-20th century, when the buildings around it were demolished to make way for the Central Artery and Government Center. The Haymarket produce market continues to operate at a location near the historic site of the square.

History of the square

During the early years of European settlement in Boston, the future site of Haymarket Square was in a part of Boston Harbor called Mill Cove. The mouth of the cove was dammed in the 1640s, turning it into Mill Pond. In 1807, the town of Boston gave the Boston Mill Corporation permission to begin filling in Mill Pond. A street plan for the filled land was proposed in 1808 by Charles Bulfinch. Filling of the pond to create the area known as the Bulfinch Triangle was completed in the early 1820s. The future location of Haymarket Square, where Merrimack, Canal, and Charleston Streets converged at the southern tip of the Bulfinch Triangle, appears on an 1826 map. 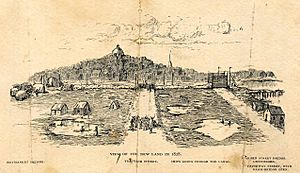 A drawing published in 1895 entitled "View of the New Land in 1828" shows Haymarket Square. Images from the early 1800s show hay being sold in the square. The name Haymarket Square appears on an 1844 map.

From its opening in 1845 to its demolition in 1897, the most prominent building on the square was the Boston and Maine Railroad depot. In 1893, the depot was replaced by North Union Station, several blocks to the north on Causeway Street. The depot was demolished to make way for construction of the Canal Street incline, the northern end of the Tremont Street subway, the predecessor to the MBTA Green Line. The Haymarket station on the subway line opened in 1898, with an entrance kiosk in the center of Haymarket Square. In 1902, the Haymarket Relief Station, a branch of Boston City Hospital, opened in a new building on the former site of the depot on the north side of the square.

The name "Haymarket" in Boston

The Haymarket Theatre operated in a building on the other side of Boston Common several decades before the creation of Haymarket Square.

Haymarket Station on the MBTA Orange and Green lines is located adjacent to the historic site of the square.

"Haymarket Square" was the original name of a hotel and market building which began construction in 2018 on Blackstone Street between Hanover Street and North Street, a block south of the historic location of Haymarket Square. As of spring 2020, the hotel was to be called the "Canopy Hotel Parcel 9".

360 degree view of Haymarket Square painted in about 1895, that "purports to show the area in 1835." It shows Haymarket Square connected to Boston Harbor by Canal Street, along which also ran railroad tracks and the canal for which the street was named.

All content from Kiddle encyclopedia articles (including the article images and facts) can be freely used under Attribution-ShareAlike license, unless stated otherwise. Cite this article:
Haymarket Square (Boston) Facts for Kids. Kiddle Encyclopedia.