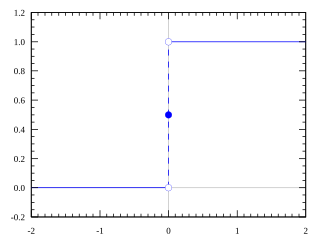 The Heaviside function, often written as H(x), is a non-continuous function whose value is zero for a negative input and one for a positive input.

The function is used in the mathematics of control theory to represent a signal that switches on at a specified time, and which stays switched on indefinitely. It was named after the Englishman Oliver Heaviside.

The Heaviside function is the integral of the Dirac delta function: H′(x) = δ(x). This is sometimes written as

We can also define an alternative form of the Heaviside step function as a function of a discrete variable n:

where n is an integer.

This function is the cumulative summation of the Kronecker delta:

is the discrete unit impulse function.

Often an integral representation of the Heaviside step function is useful:

All content from Kiddle encyclopedia articles (including the article images and facts) can be freely used under Attribution-ShareAlike license, unless stated otherwise. Cite this article:
Heaviside Function Facts for Kids. Kiddle Encyclopedia.