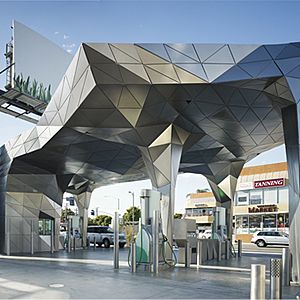 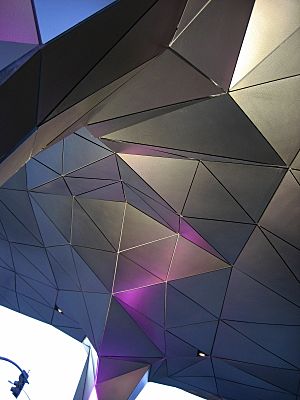 The Helios House is a gas station in Los Angeles, located on Olympic Boulevard. It is designed as a green station with special features and is considered to be the "station of the future." It is the first gas station in the United States to be submitted for LEED certification.

The gas station was designed by Office dA (Principal architects Monica Ponce de Leon and Nader Tehrani) in Boston and Johnston Marklee Architects in Los Angeles. The architects were hired by Ogilvy & Mather, led by Brian Collins. The purpose of the design was to reinvent the gas station.

Built in 2007, it is seen as a Los Angeles landmark. It started out selling BP branded gasoline, but in 2010 switched to ARCO.

Features of the station

All content from Kiddle encyclopedia articles (including the article images and facts) can be freely used under Attribution-ShareAlike license, unless stated otherwise. Cite this article:
Helios House Facts for Kids. Kiddle Encyclopedia.