Heliotropium arboreum is a species of flowering plant in the borage family, Boraginaceae. It is native to tropical Asia including southern China, Madagascar, northern Australia, and most of the atolls and high islands of Micronesia and Polynesia. Common names include velvetleaf soldierbush, tree heliotrope, veloutier, and octopus bush. It is a shrub or small tree typical of littoral zones reaching a height of 3.6 m (12 ft), with a spread of about 5 m (16 ft). 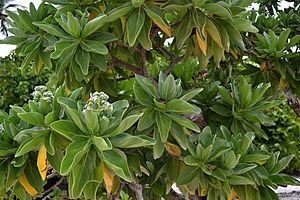 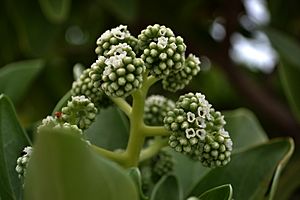 Historically in the Maldives the leaves were often used as famine food.

The wood of H. arboreum is commonly used to make handicrafts, tools, and, in Polynesia, frames for swim goggles. Due to its availability, H. arboreum is used as firewood, and has become rare in some areas as a result.

Octopus bush is used in many Pacific islands as a traditional medicine to treat ciguatera fish poisoning, which is caused by powerful ciguatoxins produced by microscopic Gambierdiscus algae. Scientists from the Institute of Research for Development (IRD) and the Louis Malarde Institute in French Polynesia and Pasteur Institute in New Caledonia are researching the plant chemistry and believe that senescent leaves contain rosmarinic acid and derivatives, which are known for its antiviral, antibacterial, antioxidant, and anti-inflammatory properties. The researchers think that rosmarinic acid removes the ciguatoxins from their sites of action, as well as being an anti-inflammatory agent.

All content from Kiddle encyclopedia articles (including the article images and facts) can be freely used under Attribution-ShareAlike license, unless stated otherwise. Cite this article:
Heliotropium arboreum Facts for Kids. Kiddle Encyclopedia.