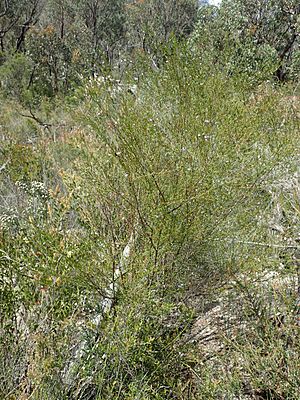 Hemigenia cuneifolia is a plant in the family Lamiaceae and is endemic to eastern Australia. It is a shrub with oblong leaves arranged in whorls of three, and blue to mauve flowers.

Hemigenia cuneifolia was first formally described in 1870 by George Bentham and the description was published in Flora Australiensis from specimens collected by William Woolls and Hermann Beckler.

Hemigenia cuneifolia grows in forest from south east Queensland to the Hill Top area of New South Wales and as far inland as the Pilliga Scrub.

All content from Kiddle encyclopedia articles (including the article images and facts) can be freely used under Attribution-ShareAlike license, unless stated otherwise. Cite this article:
Hemigenia cuneifolia Facts for Kids. Kiddle Encyclopedia.