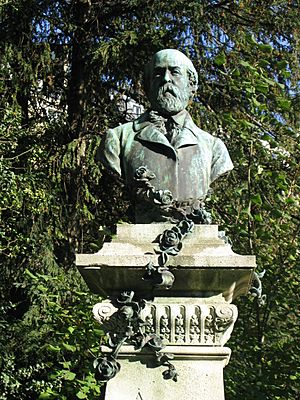 Statue of Murger in Paris built 1895

Henri Murger (27 March 1822 – 28 January 1861) was a French writer. He is known for a book called Scènes de la vie de bohème. This book is about the life of poor poets, artists, and musicians in Paris of the 1830s. It became the basis for Giacomo Puccini's opera La bohème, for Ruggero Leoncavallo's opera of the same name, and for other musical works. Murger was born and died in Paris.

He was very famous.

All content from Kiddle encyclopedia articles (including the article images and facts) can be freely used under Attribution-ShareAlike license, unless stated otherwise. Cite this article:
Henri Murger Facts for Kids. Kiddle Encyclopedia.