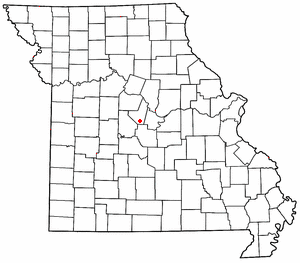 High Point is an unincorporated community in southern Moniteau County, Missouri, United States. It is located ten miles south of California about one mile west of Route 87.

The first settlement at High Point was made in the 1830s. A post office called High Point was established in 1852, and remained in operation until 1973. The community was so named on account of its lofty elevation.

The High Point Historic District was listed on the National Register of Historic Places in 2005.

All content from Kiddle encyclopedia articles (including the article images and facts) can be freely used under Attribution-ShareAlike license, unless stated otherwise. Cite this article:
High Point, Missouri Facts for Kids. Kiddle Encyclopedia.