Kids Encyclopedia Facts
This page is about the theatre in Baltimore. For other uses, see Hippodrome (disambiguation).

The Hippodrome Theatre is a theater in Baltimore, Maryland.

Built in 1914 for impresarios Marion Scott Pearce and Scheck, the 2300-seat theater was the foremost vaudeville house in Baltimore, as well as a movie theater. When the movie palace opened, it was the largest theatre in the United States south of Philadelphia. The Hippodrome was designed by Thomas W. Lamb, one of the foremost theater architects of his time. Lamb gave the theater an unusually strong presence on Eutaw Street through the use of brick and terra cotta on a massive façade. The Hippodrome was renovated in 2004 for use as a performing arts theater, and is part of the France-Merrick Performing Arts Center.

The site had previously been occupied by the five story House Hotel, built in 1835 and destroyed by fire on May 25, 1912. The new theater had an original capacity of 3,000 seats and boasted a Moller organ, as well as a house orchestra that survived into the 1950s. The Loew's chain operated the Hippodrome from 1917 to 1924, then Keith-Albee-Orpheum assumed stewardship. In 1920 the average weekly attendance was 30,000. During the 1930s the Hippodrome featured such performers as Jack Benny, Milton Berle, Bob Hope, Martha Raye, Dinah Shore, Red Skelton, The Three Stooges, the Andrews Sisters, Morey Amsterdam, and Benny Goodman. Frank Sinatra first performed with Harry James at the Hippodrome. Live performances ceased in 1959, but movies remained strong through the 1960s. The Hippodrome finally closed in 1990 as the last movie theater in downtown Baltimore. 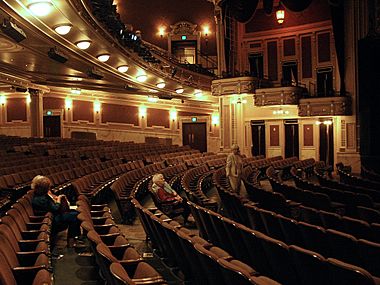 All content from Kiddle encyclopedia articles (including the article images and facts) can be freely used under Attribution-ShareAlike license, unless stated otherwise. Cite this article:
Hippodrome Theatre (Baltimore) Facts for Kids. Kiddle Encyclopedia.