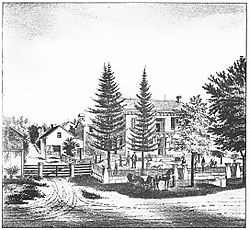 The Hiram Bell Farmstead was built by Hiram Bell in 1850. It is located in Fairfield Township, Columbiana County, Ohio. The house and adjoining buildings were added to the National Register of Historic Places as a historic district in 1999.

Bell was a native of Columbiana County, born at the family homestead approximately 2.5 miles (4.0 km) southwest of East Fairfield in Elkrun Township. In 1877, Bell was elected to a three-year term as a Columbiana County commissioner. By this time, he had built himself a reputation as a prosperous businessman. Beside his farm, Bell supported his family via a simple industrial facility: throughout the 1860s and 1870s, he owned a steam sawmill in Elkrun Township.

All content from Kiddle encyclopedia articles (including the article images and facts) can be freely used under Attribution-ShareAlike license, unless stated otherwise. Cite this article:
Hiram Bell Farmstead Facts for Kids. Kiddle Encyclopedia.