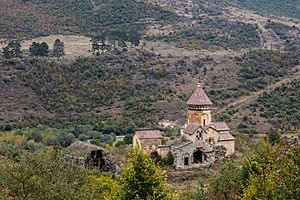 Hnevank (Armenian: Հնեվանք, means old monastery) is a 7th century Armenian Apostolic Church monastery. It is near the city of Stepanavan in the Lori marz of Armenia. The monastery is on a hill within a gorge, near where the Dzoraget and Gargar rivers join.

The monastery was all rebuilt by lord Smbat of the House of Orbelian, a branch of the Liparitids who were removed to Armenia in the late 12th century from Georgia. Liparitids were themselves a branch of the Mamikonians. Smbat was the ancestor of the Armenian princes of Syunik. Georgian writings around the drum attests his name. The monastery has a gavit and various service buildings around the site. The government of Armenia has recently begun fixing the monastery. The broken dome of the main church has been restored entirely.

All content from Kiddle encyclopedia articles (including the article images and facts) can be freely used under Attribution-ShareAlike license, unless stated otherwise. Cite this article:
Hnevank Facts for Kids. Kiddle Encyclopedia.