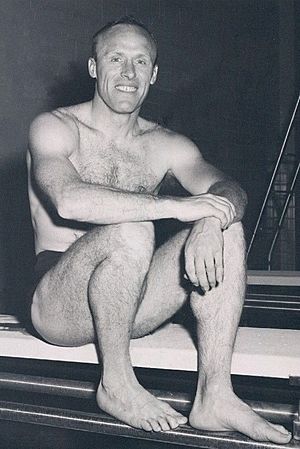 Hobie Billingsley (born June 23, 1927) is an American diving champion. He was honored at the International Swimming Hall of Fame. He was best known for coaching the U.S. Swim Team in 1996 Summer Olympics in Atlanta. He was born in Bloomington, Indiana.

Billingsley published the second edition of his Diving Illustrated. Billingsley is one of only six diving coaches mentioned in the American Red Cross's Swimming and Water Safety [WSI Manual, 2004]; in the chapter on the history of the sport.

In July 2018, Billingsley was diagnosed with myasthenia gravis and hospitalized.

All content from Kiddle encyclopedia articles (including the article images and facts) can be freely used under Attribution-ShareAlike license, unless stated otherwise. Cite this article:
Hobie Billingsley Facts for Kids. Kiddle Encyclopedia.