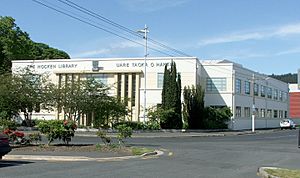 Hocken Library in 2005, housed in a former cheese-making factory.

Hocken Collections (Māori: Uare Taoka o Hākena, formerly the Hocken Library) is a research library, historical archive, and art gallery based in Dunedin, New Zealand. Its library collection, which is of national significance, is administered by the University of Otago.

The Collections' specialist areas include items relating to the history of New Zealand and the Pacific, with specific emphasis on the Otago and Southland Regions. Open to the general public, the library is one of the country's most important historical research facilities.

Hocken Collections is the result of the philanthropy of avid collector Dr. Thomas Hocken, who donated his private collection to the university in trust for the New Zealand public. Hocken had offered his collection to public use in 1897, but it was not until 1910 that it became generally accessible in a wing of the Otago Museum. Hocken was too ill to attend the official opening on 23 March 1910 (the 62nd anniversary of the founding of Dunedin), and died just two months later.

Until 1965 the library was entirely housed in the Otago Museum. From that time its pictures collection and increasingly more of its other holdings were housed on other sites around the University of Otago's campus, the pictures being at the Central Library. In 1980 the collections were again brought together under one roof in the new Hocken Building (now renamed the Richardson Building), designed by E.J. McCoy. It soon outgrew that site and additional accommodation was secured at another site in Leith Street. It was reconsolidated on another site in 1998 in the former Otago Co-operative Dairy Company factory on Anzac Avenue, east of the main campus. In 2005, its name was changed to Hocken Collections.

Hocken Collections holds the largest collection of manuscripts, maps, and early photographs relating to the history of the Otago Region, as well as several notable collections relating to the country as a whole. The latter include the letters and journals of Samuel Marsden and New Zealand records of the Church Missionary Society. The personal and public papers of many important Otago people are also present in the library's collections, including those of the writers James K. Baxter and R. A. K. Mason, as well as the political writings of many of the community's leaders. The library's collection also includes a substantial body of photographic work by the Burton Brothers.

All content from Kiddle encyclopedia articles (including the article images and facts) can be freely used under Attribution-ShareAlike license, unless stated otherwise. Cite this article:
Hocken Collections Facts for Kids. Kiddle Encyclopedia.