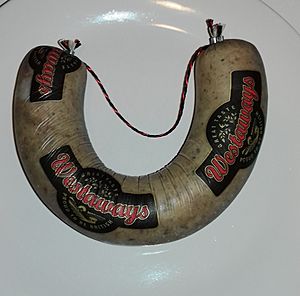 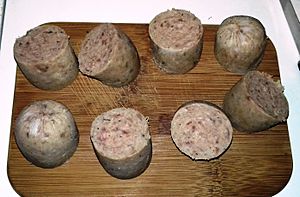 A hog's pudding, sliced and ready to fry 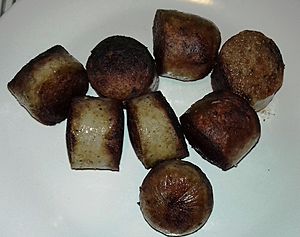 A hog's pudding, fried and ready to eat

Hog's pudding is a type of sausage produced in parts of Devon and Cornwall. Some versions of the recipe comprise pork meat and fat, suet, bread, and oatmeal or pearl barley formed into the shape of a large sausage—also known as 'groats pudding' and are very similar to a white pudding, whereas other versions of the recipe contain a high percentage of offal such as lung and liver and can more accurately be described as a sort of West Country haggis. It is much spicier than white pudding as it contains black pepper, cumin, basil and garlic. The sausage is usually around two inches in diameter. It costs about £7-9 per kilo.

All content from Kiddle encyclopedia articles (including the article images and facts) can be freely used under Attribution-ShareAlike license, unless stated otherwise. Cite this article:
Hog's pudding Facts for Kids. Kiddle Encyclopedia.