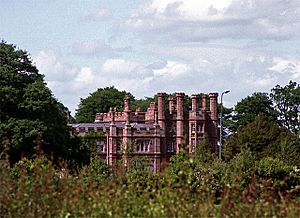 Holme Eden Abbey was an abbey in Cumbria, England. The current building (built 1833–37) is a Grade II* listed building.

It was designed in 1833 by John Dobson of Newcastle for a Peter Dixon (a cotton mill owner at Warwick Bridge). It is said to have seven entrances, 52 chimney pots and 365 windows. In 1875 it was sold to a Wiliam Watson.

From 1921 until 1983 it served as an abbey to Benedictine nuns. It then served as an exclusive old persons home before being converted into an award winning development of twelve apartments. The old walled garden was developed with homes built inside it.

All content from Kiddle encyclopedia articles (including the article images and facts) can be freely used under Attribution-ShareAlike license, unless stated otherwise. Cite this article:
Holme Eden Abbey Facts for Kids. Kiddle Encyclopedia.