Home of Truth is a ghost town located in San Juan County in southeastern Utah, United States. The settlement was a short-lived utopian religious intentional community in the 1930s, led by a spiritualist named Marie Ogden. The Home of Truth started in 1933 with an initial population of 22 people, but grew to around 100 at its peak.

During its brief history the town was isolated from the surrounding community socially as well as physically, its residents keeping to themselves in a strict, simple lifestyle. Ogden took over the local newspaper and used it to introduce outsiders to her beliefs. The crisis that led to the downfall of the Home of Truth resulted from her writings about efforts to raise a woman from the dead. The investigations by local authorities and the intense media attention that followed drove most of the members to abandon the group by the end of 1937. A handful of residents continued to occupy Home of Truth until 1977.

Today the empty buildings at Home of Truth, lying on fenced private land, are little-noticed curiosities along Utah State Route 211, seen mainly by visitors to the Needles district of Canyonlands National Park. 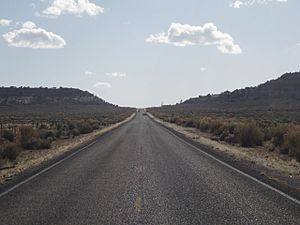 Photograph Gap. The "Inner Portal" is on the horizon just to the right of the road.

The site of Home of Truth lies about 15 miles (24 km) north of Monticello, Utah, and some 3 miles (4.8 km) west of Church Rock. The settlement was spread out along Dry Valley, bounded on the north and south by irregular mountain ridges that come close together at the western end, in a place called Photograph Gap. Utah State Route 211, the road to Newspaper Rock and the entrance to the Needles district of Canyonlands National Park, passes through the site. 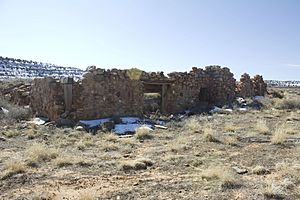 Unfinished chapel at the Middle Portal

Marie Ogden (May 31, 1883 – March 4, 1975) was a wealthy, well-educated widow from Newark, New Jersey. She was prominent and active in community affairs, working for the welfare of the poor and rising to the presidency of the New Jersey State Federation of Women's Clubs. After the death of her husband, Harry Ogden, in 1929, she sought comfort in spiritualism, soon forming an occult group called the School of Truth.

The Home of Truth was constructed in three sections spread a few miles apart from east to west. The Outer Portal was made up of several buildings, including a communal house and dormitory. The Middle Portal, largest of the three, was planned to include a chapel made of cobblestones, although the foundation was never even finished. The Inner Portal contained barracks and six houses. Marie Ogden taught that the Inner Portal, where she lived with her daughter Roberta, was located on the exact center of the Earth's axis, and that only those who lived here would be spared the coming calamities of the last days. There were at least 23 buildings scattered throughout Home of Truth, most with simple exteriors of unpainted board and batten or tar paper shingles.

Residents agreed to a strict code of conduct. They surrendered all personal possessions to the group, which provided food, clothing, and shelter. The rules also forbade consumption of alcohol and tobacco. Although the colony raised chickens in the beginning, eating any meat except fish was later prohibited. Ogden even said they must stop planting gardens, but they were still permitted to hire out as laborers to local farmers. Ogden received instructions for the settlement through her typewriter as well as in revelatory trips to the top of nearby Shay Mountain. She taught from the Aquarian Gospel and other theosophical works.

All group members were expected to work in common for the settlement. The women did domestic chores, while the men worked the farm and did some prospecting for gold, on a small scale and without much success. Water was scarce, but they installed a windmill-driven water pump and concrete cisterns for irrigating their fields. Members constructed the buildings themselves. There was no electricity or indoor plumbing, consistent with their belief in material simplicity. They also made their own furniture and household goods by hand, supplemented by Ogden's occasional shopping trips to Monticello. Despite this spartan existence, the colony continually added new members, the population growing to around 100 at its height in 1934–5.

In August 1935 all but seven of Ogden's remaining followers abandoned Home of Truth. 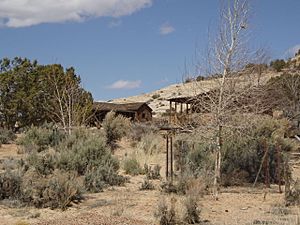 Left nearly alone, Marie Ogden continued to support herself by publishing the newspaper and by teaching piano lessons to the children of Monticello. In 1949, Ogden sold The San Juan Record. She eventually moved into the San Juan Nursing Home in Blanding, where she died in 1975. The Home of Truth property was privately sold in the 1970s to prevent the government from seizing it to pay for Ogden's care. Her personal papers and guest register were destroyed just before the sale. A few of her followers continued to live at Home of Truth until September 30, 1977, when the new owners sold the remaining contents of the Inner Portal at auction. All three Portals still held locked, dusty buildings, maintained by a caretaker and surrounded by "No Trespassing" signs.

As of 2008 there is nothing left of the Outer Portal, but buildings still stand at the other two. The property owner has worked to preserve the Inner Portal, and has announced plans to allow public tours once the site is restored. Both remaining Portals are fenced off from the road, and a sign reading "Marie's Place" hangs over the gate to the Inner Portal, on a ridge just north of State Route 211. A small cemetery holds five graves.

All content from Kiddle encyclopedia articles (including the article images and facts) can be freely used under Attribution-ShareAlike license, unless stated otherwise. Cite this article:
Home of Truth, Utah Facts for Kids. Kiddle Encyclopedia.