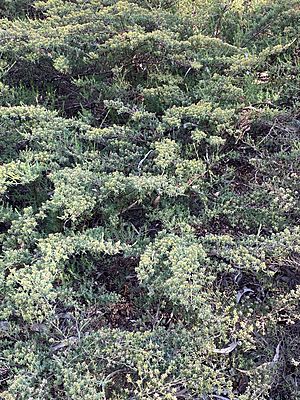 Homoranthus melanostictus is a plant in the myrtle family Myrtaceae and is endemic to eastern Australia. It has cylinder-shaped to flattened leaves with blackish oil dots and up to six yellow flowers arranged in leaf axils near the ends of the branchlets.

Homoranthus melanostictus may grow to a height 0.25 m (0.8 ft), spreads horizontally and becomes erect at the end of the branches.

Homoranthus melanostictus was first formally described in 1991 by Lyndley Craven and S.R Jones and the description was published in Australian Systematic Botany. The specific epithet (melanostictus) is derived from the Ancient Greek words melas meaning "black" or "dark" and stiktos meaning "punctured", "dappled" or "spotted".

Widely spread in south-eastern Queensland from north west of Taroom to south of Tara. Grows on sandy soils in shrubby woodland and heath.

All content from Kiddle encyclopedia articles (including the article images and facts) can be freely used under Attribution-ShareAlike license, unless stated otherwise. Cite this article:
Homoranthus melanostictus Facts for Kids. Kiddle Encyclopedia.