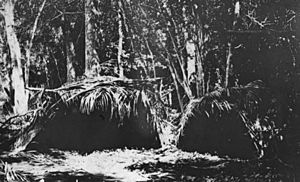 Hopevale, (or Hope Vale), Queensland, Australia is an Aboriginal community on Cape York Peninsula about 46 kilometres (29 mi) northwest of Cooktown by road, and about 10 kilometres (6.2 mi) off the Battlecamp Road that leads to Lakefield National Park and Laura. At the 2011 census, Hopevale had a population of 1,005 people.

The Cape Bedford Mission was established by Johann Flierl, a missionary of the Lutheran Church in 1886, with the settlement at Elim on the beach.

Owing to fears that the German-influenced Aboriginal people might cooperate with the advancing Japanese in World War II, the total population of 286 was evacuated south to various communities by the military in May 1942. The German Lutheran missionaries were sent to internment camps. Most of the people were sent to Woorabinda, near Rockhampton, in Queensland, where a large number reportedly perished from disease and malnutrition. Hope Vale was re-established as a Lutheran mission in September 1949. Aboriginal people from the Hope Valley and Cape Bedford Missions settled there. A work crew was allowed to return in 1949 and the first families came home in 1950. Hopevale Post Office opened on 1 May 1965 and closed in 1990. 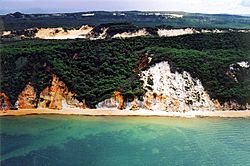 Hopevale is no longer run as a mission by the church but by its own elected community council. In 1986 it received a "deed of grant in trust" (DOGIT) which "granted title to 110,000 ha of land which was previously Aboriginal Reserve Land held by the Under Secretary as trustee, to the community council to act as trustees of the land for the benefit of the residents." The Aboriginal Land Act 1991 (Qld) transferred into Indigenous ownership all previous reserve land under DOGIT (Deed of Grant in Trust) titles.

Hopevale is home to several clan groups who mostly speak Guugu Yimidhirr and other related languages, as well as English.

Due to a lack of reliable water supplies at Elim, the community was shifted about 20 kilometres (12 mi) inland to its present site.

Notable former residents of Hopevale are Queensland rugby league player Matt Bowen and lawyer and activist Noel Pearson. Pearson has criticised the level of violence in the community.

The Hope Vale community has a strong choral singing tradition since its evacuation to Woorabinda. The ensemble has performed at the Queensland Music Festival on three occasions—in 2005, 2007 and 2009.

All content from Kiddle encyclopedia articles (including the article images and facts) can be freely used under Attribution-ShareAlike license, unless stated otherwise. Cite this article:
Hopevale, Queensland Facts for Kids. Kiddle Encyclopedia.