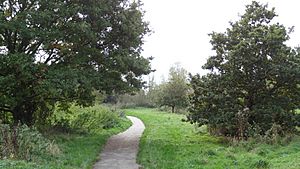 Hornchurch Country Park is a 104.5-hectare park on the former site of Hornchurch Airfield, south of Hornchurch in the London Borough of Havering, east London.

The River Ingrebourne passes through the park and if forms part of Thames Chase Community Forest. The most popular part of the park is to the west of the Ingrebourne, where the ground is flat and paved; this area is most commonly frequented by dog walkers. The woodland to the east of the river is somewhat inaccessible. Some southern parts of the park that reach into Rainham have been used as landfill.

There is a fishing lake located there, and there are many paths leading from the park to other nearby areas, including Upminster, Dagenham and Rainham.

There are a number of pillboxes and other items dating from the Second World War to be found in the park.

The park is a Site of Borough Importance for Nature Conservation, Grade I. Almost all of it falls within the Ingrebourne Valley Local Nature Reserve, and the eastern edge is part of the Ingrebourne Marshes Site of Special Scientific Interest.

There is access from Airfield Way/Squadron's Approach, off South End Road.

All content from Kiddle encyclopedia articles (including the article images and facts) can be freely used under Attribution-ShareAlike license, unless stated otherwise. Cite this article:
Hornchurch Country Park Facts for Kids. Kiddle Encyclopedia.