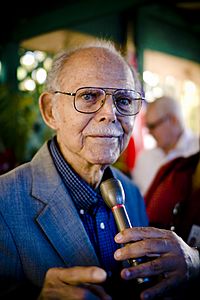 He was best known as a revolutionary who assisted Fidel Castro, Che Guevara and other members of the 26th of July Movement (M-26-7) in removing the dictatorship of Fulgencio Batista as part of the Cuban Revolution. He was against Batista since the general's effective coup in 1952, which he called unconstitutional, but became more critical of the movement's shift towards Marxist principles, and closing ties with leaders of the Communist Party of Cuba (PCC). He was convicted of "treason and sedition" by the new Castro regime. He would spend 20 years in prison (1959–1979) before being released in 1979.

After his release, he spent his time between Miami, Florida, United States and Costa Rica. He was politically active in speaking out against the Cuban government.

All content from Kiddle encyclopedia articles (including the article images and facts) can be freely used under Attribution-ShareAlike license, unless stated otherwise. Cite this article:
Huber Matos Facts for Kids. Kiddle Encyclopedia.