The Huka Falls are a set of waterfalls on the Waikato River that drains Lake Taupo in New Zealand.

A few hundred metres upstream from the Huka Falls, the Waikato River narrows from approximately 100 metres across into a canyon only 15 metres across. The canyon is carved into lake floor sediments laid down before Taupo's Oruanui eruption 26,500 years ago.

At the top of the falls is a set of small waterfalls dropping over about 8 metres. The final stage of the falls is over a 6-metre drop, raised to an effective 11m fall by the depth of the water. The falls are a popular tourist attraction, being close to Taupo and readily accessible from State Highway One. 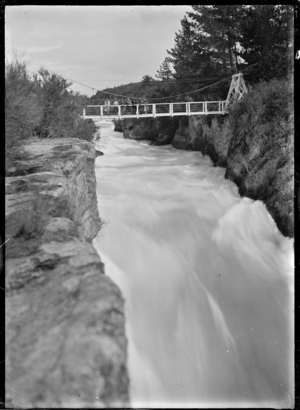 Huka Falls and suspension bridge with onlookers in 1928

All content from Kiddle encyclopedia articles (including the article images and facts) can be freely used under Attribution-ShareAlike license, unless stated otherwise. Cite this article:
Huka Falls Facts for Kids. Kiddle Encyclopedia.