The Humboldt Crabs are a collegiate summer baseball team located in Arcata, California. Playing in every season since they were founded in 1945 by Lou Bonomini, later joined by Ned Barsuglia, the Crabs are the oldest continually-operated summer collegiate baseball team in American baseball. Through the 2019 season the Crabs have a total record of 2557 wins and 803 losses. The Crabs did not play the 2020 season due to the COVID-19 pandemic.

Every Crabs game is broadcast on KGOE 1480 AM by longtime broadcasters Benjamin “the Professor” Shaeffer and Bob “Hoke” Holcomb. Most games also include the Crab Grass Band, formed in 1985, that play songs in between innings.

Originally the Eureka Paladini Crabs, named for the Paladini Fish Company who sponsored the team from 1945 to 1947.

In the 70-year history of the Humboldt Crabs, over 300 players have continued on to play professional baseball, with over 60 former Crabs going all the way to the Major Leagues. A few examples are Garth Iorg, Dane Iorg, and Wally Scott. John Oldham, a Crabs pitcher in 1952–53, was the first to make it all the way, playing for the Cincinnati Reds in 1956. More recently, Leo Rosales, who pitched for the 2002 Crabs, was called up to the Arizona Diamondbacks in 2008. 2003 Crabs infielder Brett Pill was called up to the San Francisco Giants in 2011, and was on the team's 2012 roster as a 1st baseman.

The Crabs play the majority of their games at home at the Arcata Ball Park, owned by the City of Arcata. The team is made up of college players from different NCAA programs throughout the U.S. The Humboldt Crabs are a non-profit baseball organization operated by a 14-member all-volunteer Board of Directors. Major rivals include the Redding Colt .45s, the Fontanetti's Athletics, and the Seattle Studs.

The Humboldt Crabs are a non-profit, community-oriented organization. Its mission is four-fold:

To promote family entertainment by providing high-quality summer collegiate baseball games to the public at a reasonable price; To provide talented collegiate-level baseball players with a positive summer baseball experience; To support youth sports programs (with an emphasis on baseball or softball) in the Humboldt County area with contributions of funding and/or equipment as funds permit in addition to annual baseball skills camps and clinics operated by Humboldt Crabs players and coaches; To preserve and build the tradition of Humboldt Crabs Baseball. 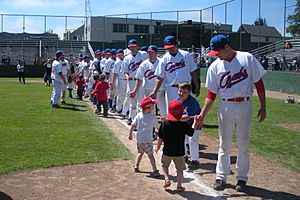 The Crabs joined the Far West League (FWL), which had ten teams participating in the 2011 season. The five-team FWL North Division included the Humboldt Crabs, Nor Cal Pirates, Redding Colt .45s, Nevada Bullets (formerly Reno Aces), and Southern Oregon RiverDawgs. The five-team FWL South Division included the Atwater Aviators, Fontanetti's Athletics, Neptune Beach Pearl, California Glory, and Fresno Cardinals. The Crabs were part of the West Coast League/Tri-State (which was associated with the West Coast League in the Pacific Northwest) then merged with the Pacific West Baseball League to form the FWL. (The California Seals were originally an eleventh team in the FWL but are on hiatus for the 2011 season.)

This inaugural year of the Far West League culminated with the top five League teams competing in a double-elimination Tournament, hosted by the Humboldt Crabs and played in the Arcata Ball Park, August 5–7. The Humboldt Crabs (21 - 6), with the best record in regular season league play, were the top-seeded team, but lost their first game to fourth-seed Fontanetti's Athletics, 1–0, on August 5. To avoid being eliminated, the Crabs had to win four games in a row. On August 6, the Crabs shut out the Atwater Aviators, 2–0, in an elimination game. On August 7 the Crabs won three games in one day, starting with Fontanetti's Athletics, 7–2, (who had beaten the Crabs 2 of 3 games in regular-season play); then facing the Neptune Beach Pearl who had won 8 of their previous 9 games, and who were as yet undefeated in the Tournament. By winning four in a row, including 6-3 and 5-1 wins over the Pearl, the Crabs avoided elimination and won the tournament and the championship.

The Humboldt Crabs finished the 2011 season with records of 40-13 overall, 25–7 in League/Conference play.

The Humboldt Crabs rank #22 from among over 220 summer collegiate league teams in the nation for the week of August 9, 2011, by Perfect Game USA.

The Far West League has since disbanded, but the Crabs were league champions all three years in its inception.

(~) denotes season not played due to the COVID-19 pandemic

(~) denotes season not played due to the COVID-19 pandemic

All content from Kiddle encyclopedia articles (including the article images and facts) can be freely used under Attribution-ShareAlike license, unless stated otherwise. Cite this article:
Humboldt Crabs Facts for Kids. Kiddle Encyclopedia.