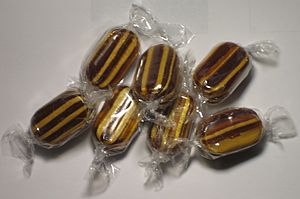 Humbugs are a traditional hard boiled sweet available in the United Kingdom, Ireland, South Africa, Canada, Australia, and New Zealand. They are usually flavoured with peppermint and striped in two different colours (often black and white). In Australia, the black and white striped humbugs are flavoured Aniseed and sold at all major supermarkets. Humbugs may be cylinders with rounded ends wrapped in a twist of cellophane, or more traditionally tetrahedral formed from pinched cylinders with a 90-degree turn between one end and the other (shaped like a pyramid with rounded edges) loose in a bag. Records of humbugs exist from as early as the 1820s, and they are referred to in the 1863 book Sylvia's Lovers as being a food from the North.

The name of the sweet is not related to the phrase "Bah, humbug" from Charles Dickens' novel A Christmas Carol. That expression implies a general dissatisfaction with the Christmas season, connected to the use of 'humbug' as a joke, or especially a fake. However, offering humbugs around Christmas time is now seen by some as humorous or ironic, and was featured in an episode of Blackadder in this manner. While awaiting the appearance of a villain in "The Adventure of the Six Napoleons" episode of The Return of Sherlock Holmes series, Jeremy Brett as Holmes admonishes Edward Hardwicke's Dr. Watson for offering Colin Jeavons' Inspector Lestrade one of these sweets saying, "Watson, this is no time for humbugs!"

A mixture of sugar, glycerine, colour, and flavouring is heated to 145 °C (293 °F). This mixture is then poured out, and stretched and folded many times. The stripes originate from a smaller piece of coloured mixture which is folded into the main mixture. The mixture is finally rolled into a long, thin cylinder and sliced into segments. 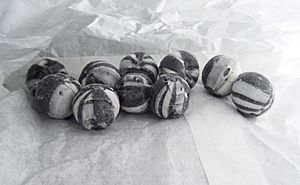 Bulls-eyes in a bag.

A similar sweet is "bulls-eye" which has red and white stripes, as opposed to black and white. These are peppermint flavoured and are also known as bullets in the UK as they are similar in size to smoothbore musket balls.

Another popular mint in the UK is the Everton mint, which is also striped black and white with a toffee centre. The mints are distributed nationally through various manufacturers and brandings, the best known of which being Bassett's.

All content from Kiddle encyclopedia articles (including the article images and facts) can be freely used under Attribution-ShareAlike license, unless stated otherwise. Cite this article:
Humbug (sweet) Facts for Kids. Kiddle Encyclopedia.