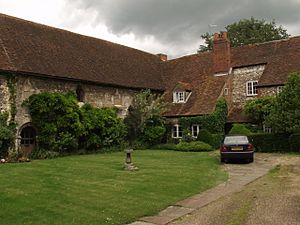 The Cloisters, a remnant of the Priory

Hurley Priory is a former Benedictine priory in the village of Hurley on the banks of the River Thames in the English county of Berkshire.

The Priory of St. Mary at Hurley was founded in 1086 by the Norman magnate Geoffrey de Mandeville I as a cell of Westminster Abbey.

The Priory was suppressed by Henry VIII in 1536 and ownership was transferred to Westminster Abbey. In 1540 Westminster Abbey itself was dissolved and the Hurley Priory property passed into lay hands. The main Abbey property became known as Lady Place. It was initially owned by Charles Howard, Esq., for three years, then by Leonard Chamberleyn, Esq., then by John Lovelace, Esq. It became the home of the Barons Lovelace. Lady Place was considered one of the great mansions in town, but it fell into disrepair and was demolished as uninhabitable in 1837.

The long narrow nave of the priory church survives and is used as the Hurley parish church. It has mainly Norman windows and doorways. To the north, the range of buildings containing the frater or monastic dining hall is incorporated into a private house. A probable monastic circular dovecote and a nearby larger barn, both to the west of the church, date from the early fourteenth century. The Abbey's former hostelry or guesthouse is incorporated into the Olde Bell Inn, one of the oldest still-working inns in Britain.

All content from Kiddle encyclopedia articles (including the article images and facts) can be freely used under Attribution-ShareAlike license, unless stated otherwise. Cite this article:
Hurley Priory Facts for Kids. Kiddle Encyclopedia.