Hurricane Anita was the only major hurricane of the inactive 1977 Atlantic hurricane season. It struck Mexico as a category 5. Though it struck as a category 5 no one knows the damage. Anita killed 11 people in Mexico. 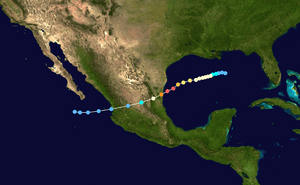 Tropical Depression One went back on a westward path than a ridge forced it. Conditions remained good and the tropical depression strengthened into Tropical Storm Anita later on August 29. Water temperatures were warm, this allow Tropical Storm Anita to become Hurricane Anita during August 30. Hurricane Anita looked like it would strike Texas at first, but other weather systems did not allow it to do so. Anita began to quickly strengthen, it had become a category 3 hurricane on September 1. By the next day, Hurricane Anita had reached its highest winds as a category 5 hurricane, while not far from the coast of Mexico.

Hurricane Anita stayed as a category 5 hurricane as it made landfall in the Mexican state of Tamaulipas on September 2. Anita weakened fast over land, weakening to a tropical storm over central Mexico later that day. It also weakened to a tropical depression before it reached the Pacific coast of Mexico.

The name Anita was retired. It was not replaced with anything specific because the tropical cyclone names change in 1979.

All content from Kiddle encyclopedia articles (including the article images and facts) can be freely used under Attribution-ShareAlike license, unless stated otherwise. Cite this article:
Hurricane Anita Facts for Kids. Kiddle Encyclopedia.